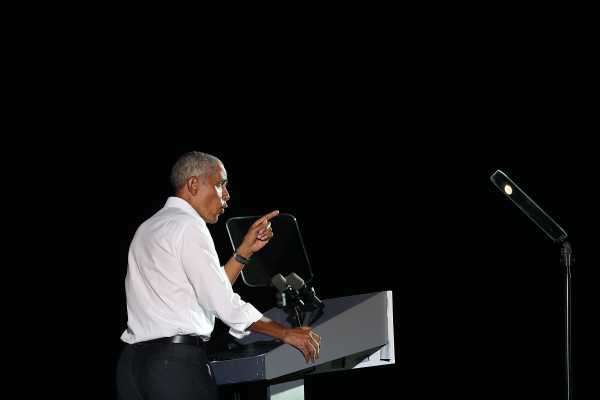 Back in 2008, Barack Obama famously harnessed the internet and social media to help win the White House. He kept up the embrace once he got there.

Now he worries that the internet and social media have helped create “the single biggest threat to our democracy.”

Obama has been saying a version of this for four years — since he left the White House — but his words are getting steadily more pointed. He’s clearly sounding an alarm, but it’s not exactly clear what he thinks we should do about it.

His latest critique comes in a new interview between Obama and Atlantic editor Jeffrey Goldberg, and before we go any further we should put it in full context: Obama was discussing a media landscape dominated not just by Facebook but by Fox News that allows Americans to choose their own distorted reality. Which means, he says, we no longer have a shared set of facts.

That assessment is now conventional wisdom among many critics of the TV and internet ecosystem. There’s almost no practical, constructive argument about how we should respond to that problem. Obama doesn’t offer one in his interview, either.

And again, it’s incorrect to say that Obama is laying the problems of our broken information landscape solely at the feet of Facebook or any other particular tech company. But he is certainly lacing into them now in a way he didn’t do prior to leaving the White House.

Later in the interview, Obama makes it quite clear that much of his concern is specifically about the internet — which he is also quite clear isn’t “going away” — and the big platforms that sort and distribute most of the internet for most people:

Obama’s criticisms of Fox News and the Rupert Murdoch empire predate his time in the White House. It continued once he was there.

During his eight-year tenure, though, Obama was quite welcoming to the tech industry, and vice versa: Obama stocked the White House with Silicon Valley veterans, and White House veterans later landed important jobs in Silicon Valley.

And Google executives in particular, starting with former Google CEO Eric Schmidt, had frequent meetings with White House staff. Near the end of Obama’s presidency, the Wall Street Journal reported that career regulators wanted to pursue antitrust charges against Google but were overruled by political appointees.

Obama certainly understood the power of social media, which helped him get into office. In the last days of the 2016 presidential campaign, Obama was reportedly obsessed with a BuzzFeed story about Macedonian teens flooding Facebook with fake news.

But it wasn’t until after the election that Obama sounded off in public about “active misinformation” on Facebook and TV. Days later, he pulled Facebook CEO Mark Zuckerberg aside for a private plea “to take the threat of fake news and political disinformation seriously.”

And while Obama made a point of keeping a low profile during most of the Trump era, when he did surface, he would often take pains to spell out his criticisms of social media:

“I do think the large platforms — Google and Facebook being the most obvious, Twitter and others as well, are part of that ecosystem — have to have a conversation about their business model that recognizes they are a public good as well as a commercial enterprise,” he said at an MIT event in 2018. “We have to have a serious conversation about, what are the business models, the algorithms, the mechanisms, whereby we can create more of a common conversation. And that can not just be a commercially driven conversation.”

Obama was calling for a “serious conversation” about our information dystopia two years ago. Now he’s calling for “a combination of government regulations and corporate practices” to deal with it.

It is difficult to be optimistic that we’ll get there. It’s hard to see the federal government regulating big tech in a serious way, because Democrats and Republicans don’t have shared facts about the problem; Republicans, in fact, have elected a QAnon promoter to Congress. And Big Tech isn’t remotely comfortable regulating itself — it would rather have government regulate big tech. And it would be surprising if Joe Biden — who had little to say about tech during his presidential campaign — and Kamala Harris — a longtime ally of Silicon Valley — make it a focus in a pandemic presidency.

A modest suggestion: Barack Obama is still working on the second volume of his memoirs. This seems like a problem worth focusing on after that.