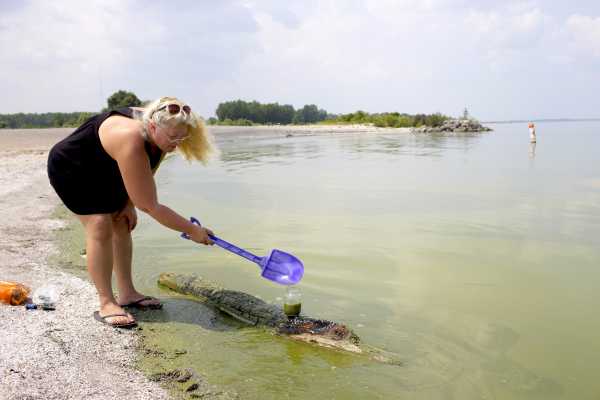 It started in a pub. A handful of people, hunched over beers in Toledo, Ohio, were talking about a water crisis that had plagued the city in 2014. The pollution of Lake Erie had gotten so bad that it had taken a serious toll on their lives. The government, they felt, wasn’t doing enough to protect the lake. And so they wondered: What if the lake could protect itself?

The idea they hatched that night ultimately resulted in a special election, which has the citizens of Toledo voting today on a very unusual question: Should Lake Erie be granted the legal rights normally reserved for a person?

If the measure passes, citizens will be able to sue on behalf of the lake whenever its right to flourish is being contravened — that is, whenever it’s in danger of major environmental harm.

“There’s a lot of nervous energy,” Tish O’Dell, who was at the pub that fateful night, told me while traveling between different polling places in Toledo. She was on tenterhooks as she waited for the election results. “It’s like torture.”

If the stakes feel almost unbearably high for the activists who have pushed for the Lake Erie Bill of Rights, it’s because this is the first rights-based legislation aimed at protecting a whole US ecosystem: the lake, its tributaries, and the many species that live off it.

The proposed law isn’t without precedent, though. It’s part of the nascent rights of nature movement, which has notched several victories in the past dozen years. Rivers and forests have already won legal rights in countries like Ecuador, Colombia, India, and New Zealand.

Activists in the movement often argue that the environment is the next frontier in humanity’s expanding moral circle: over the centuries, we’ve extended rights to more and more beings, so why shouldn’t nature itself be next?

They reject the conventional Western way of relating to nature — as property that is ours for the taking, as an object rather than a subject — but they recognize they’re going to have to work within the existing Western legal system if they want that to change. They’re betting that the best strategy for protecting the environment is to stretch our society’s understanding of what counts as a person. It’s a bold bet, but with climate change decimating the planet at such a ferocious rate, it might be the kind of innovative thinking we need.

How the rights of nature idea took off

In 1972, the case of Sierra Club v. Morton came before the US Supreme Court, leading to a deliberation over whether nature should have its own rights. The Court decided the answer was no, but Justice William O. Douglas dissented. “Contemporary public concern for protecting nature’s ecological equilibrium,” he wrote, “should lead to the conferral of standing upon environmental objects to sue for their own preservation.”

That same year, law professor Christopher Stone made a splash with an article titled “Should trees have standing?” It catalyzed other academics to write a slew of articles and books considering whether natural environments ought to have rights enshrined in law.

In 2006, that question left the ether of academia and came to bear directly on toxic sewage sludge, which had been dumped in Tamaqua, Pennsylvania. Residents fought for — and won — the first-ever rights of nature law in the world. Two years later, Ecuador became the first country to enshrine the rights of nature in its constitution, thanks in large part to the work of indigenous activists.

Since then, the victories have come fast and furious. In 2014, New Zealand recognized the legal rights of the Te Urewera forest. In 2017, Colombia granted rights to the Rio Atrato river and India recognized the Ganges and Yamuna rivers as legal persons. In 2018, the Amazon rainforest got its own rights, and for the first time, so did a specific plant species: the wild rice known as manoomin, one of the Anishinaabe people’s staple crops.

Granting the status of personhood to a natural environment may seem like a bizarre legal fiction, but it’s no more bizarre than the idea that corporations should enjoy that same status, which has been with us since the 1880s.

If we find it strange to view nature the way we view people, that may just be because we’ve grown up in an anthropocentric intellectual tradition that treats the natural world as an object to be examined and exploited for human use, rather than as a subject to be communed with and respected.

“The idea that we can be separate from nature is really a Western reductionist way of looking at the world — we can trace it back to Francis Bacon and the scientific method,” said Ben Price, the national director for the Community Environmental Legal Defense Fund, a nonprofit public interest law firm that helps people facing threats to their local environment.

Price told me that just as women’s suffrage or the abolition of slavery were once unthinkable but gradually became accepted and normalized, the rights of nature idea seems wacky now but will eventually gain social currency. “For the rights of nature to be understood and become something we’re comfortable with is going require a paradigm shift, just like the end of slavery did,” he said.

That paradigm shift may entail nothing less than a total rejection of capitalism, according to Eduardo Guydas, the executive secretary of the Latin American Center for Social Ecology in Uruguay. He argues that eco-capitalism — the attempt to reduce environmental devastation while staying within a capitalism framework — won’t be enough to address the climate crisis.

“The debate around the rights of nature is one of the most active frontlines in the fight for a non-market-based point of view,” Guydas told me. “It’s a reaction against our society’s commodification of everything.”

Will this legal strategy be effective?

The rights of nature movement has inspired new legislation around the world, but because it’s still in its infancy, we don’t yet have evidence about how much of a practical difference those laws will really make.

Ecuador, however, offers one example of concrete change. After the country enshrined the rights of nature in its constitution, locals have brought lawsuits against companies they say are causing serious environmental harm. In one recent case, people sued on behalf of a river that was being polluted in the course of a construction project. The court ruled in the river’s favor.

That outcome is inspiring to people like O’Dell in Toledo. Although she doesn’t know whether Ohioans will soon be suing on behalf of Lake Erie, she noted that that’s not the only metric of effectiveness. Just by getting the measure on the ballot and publicizing it in the national media, the activists have already achieved a number of their goals.

“There are many different effects we hope for,” O’Dell said. “One is education — that you open people’s eyes to this possibility. Two is to give notice to those doing the environmental harm that we’re not going to tolerate this anymore. Three is the hope that other people will follow you on the path you’ve started to clear.”

To Price, that last hope rises to the level of an existential need, given the pace of climate change. “We’re seeing the results of our narrow-mindedness, of our belief that nature is property and property ownership is the highest right,” he said. “The hope is that by beginning somewhere, like Toledo, the conversation enlarges. You never know what’s going to be the tipping point.”