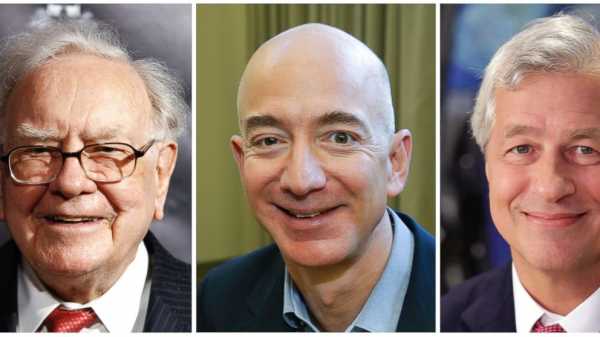 Can a legendary investor, the king of on-line retail and a Wall Street financier find a cure for what ails America’s health care system?

The trio of Warren Buffett, Jeff Bezos and Jamie Dimon have had enough success in their respective industries that they are at least being given the benefit of the doubt.

They have announced they’re forming a new company to address health care costs for their U.S. employees, and possibly for many more Americans. The news was enough to rattle investors in established health insurers and trigger a sell-off in their stocks.

Their announcement Tuesday didn’t include many specifics, but based on their very different business backgrounds it’s possible to see what each of the three business titans might contribute toward tackling the health care problem.

For starters, they’re heads of huge operations: Their three companies — Buffett’s Berkshire Hathaway, Bezo’s Amazon.com and Dimon’s JPMorgan Chase — have a combined market worth of $1.62 trillion.

Bezos, 54, runs one of the world’s biggest retail operations and by some measurement he’s now the wealthiest person on the planet. Amazon grew from a book retailer into one of the world’s most valuable companies in part because it’s extremely skilled in distributing products. It’s long been willing to lose money in order to offer customers lower prices than its competitors can bear — and in the process gain a loyal customer base. That’s what millions of Prime members love about it.

Amazon has never been consistent at turning profits because of its focus on sales growth. That’s what many investors fear about it. Investors in health care have long thought Amazon was going to get into that field and force companies that make and distribute medications or medical devices to drastically lower their prices.

When the three companies said they want to create a partnership “free from profit-making incentives and constrains,” Amazon would seem to be the blueprint.

By contrast, few associate fear with Buffett, the 87-year-old “Oracle of Omaha.” He’s respected for his 70 years of successful investing, beloved by many for giving billions to charity — he has said he plans to give away at least half his fortune — and appreciated for a common touch that includes a prodigious Coca-Cola habit and a love of junk food, along with his personal frugality. But most significant in this context is that his company, Berkshire Hathaway, owns a number of insurers including GEICO. That means he brings a lot of experience in evaluating and insuring risks.

And he’s a longtime critic of the health care system. Tuesday was not the first time Buffett had talked about growing health care costs as a “tapeworm” that harms the growth of the American economy.

Dimon, 61, is the head of the largest U.S. bank in terms of both assets and deposits. If that weren’t enough to get him entry into the conversation, JPMorgan Chase just received a big tax cut. Dimon himself earned a lot of respect for his handling of the 2008-09 financial crisis. Unlike many of its competitors, JPMorgan Chase didn’t have to be bailed out by taxpayers as a result of its bad bets on mortgage-backed securities.

That doesn’t mean he’s exactly beloved: Like its rivals, the bank did pay billions to settle allegations surrounding its sales of mortgage-backed securities prior to the crisis. He’s also known for speaking his mind in blunt terms. In July, he complained about politicians arguing about “stupid (expletive)” instead of solving problems.

The companies said their project will focus on technology that provides simplified and transparent care. Based on the executives who have been named to top roles at the new company, Jefferies & Co. analyst Brian Tanquilut said there is a good chance it will eventually try to negotiate prices directly with health care providers like hospitals, bypassing companies that act as middlemen. That could reduce costs in the medical and pharmaceutical supply chains.

“The initial plan for the new entity will be on partnering with and/or acquiring various consumer-orientated health care technology capabilities (i.e. a venture capital strategy) and eventually using them to influence and incentivize health care cost-reducing behavior,” he said, basing his speculation on the executives picked to shepherd the new company along.

Cigna was recovering some of that lost ground on Wednesday, rising about 1 percent. But AbbVie — down 3 percent — and CVS — off 2 percent — extended their losses.