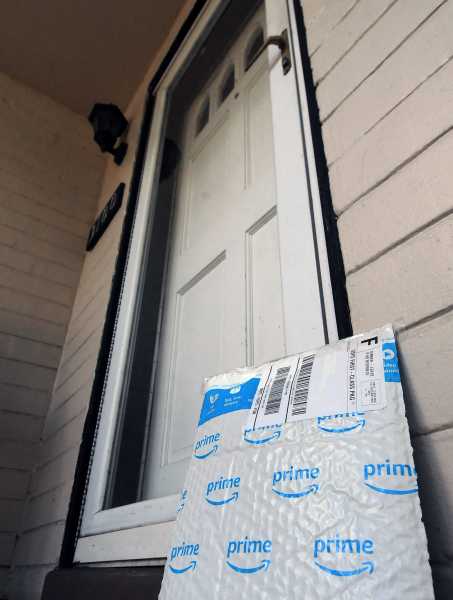 Amazon found the one part of your online shopping journey it doesn’t control — what happens between placing a package on your doorstep and you taking the package inside — and decided to buy the video doorbell security company Ring to help regulate that unknown.

Ring saves Amazon money by deterring package theft. It also advertises itself — and by extension becomes more effective — through its use of fear-based social media.

The smart doorbell lets people remotely see, hear, and talk to whoever is at their door. It also records porch thefts that users can post footage of on Ring’s social media app, Neighbors, or share with increasingly involved police departments.

“There’s an incredible cost of replacing [a stolen] item: Somebody has to understand it’s missing; it has to be processed, picked, staged, packed, mailed, and delivered,” Read Hayes, a University of Florida research scientist and the director of the retail industry group Loss Prevention Research Council, told Recode. Security devices like Amazon’s Ring help negate that loss and are “upping the game with each level: having social media, law enforcement [connections], immediate neighbor notification, branding, and marketing.”

Amazon told Recode the vast majority of its packages make it to customers without any issue, but it wouldn’t put any metrics to the number or value of those that don’t.

Ring, back in 2017 before it was acquired by Amazon, conducted a survey that found that a fifth of US households had a package stolen that year, with an average value per package of $140. Comcast’s home security arm says about a third of Americans have experienced package theft.

Amazon also didn’t share with Recode a specific stolen-package policy, but it does encourage people who’ve had packages stolen to reach out so it can fix the situation. (Funnily enough, Ring includes its own theft protection: “If your Door View Cam gets stolen, we’ll replace it for free,” reads the Amazon copy.) Generally Amazon reimburses or replaces stolen products, assuming this isn’t something that happens all the time.

When its packages get stolen, the entire cost of the stolen item plus duplicate processing and shipping is at stake for Amazon. Last year, the company paid nearly $28 billion in shipping costs, which include expenses for sortation and delivery centers and transportation. Amazon ships packages at a loss and expects those expenses to increase as it ships more packages more quickly to more customers. Duplicate shipping makes that worse.

The risk of having packages stolen can also influence what people are willing to buy online, like jewelry or electronics, potentially hurting Amazon’s e-commerce sales.

While we don’t yet know how effective the expanding network of Ring devices in the US is at deterring package theft, just the scale of Amazon’s operation means that even incremental theft prevention could save it significant money.

Security devices like Ring can be effective in deterring theft, granted that people notice them, know what they are, and believe the cameras could get them in trouble, according to Hayes. That’s where Amazon’s marketing of the devices, combined with its accompanying Neighbors social media app, comes in. The Loss Prevention Research Council, which is funded by more than 70 major retail chains including Amazon, conducts real-world theft prevention research in stores and on porches, in addition to interviewing people who’ve been convicted of theft.

“The more popular or integrated with more people, the more credible the system is — credible to me, to the offender, and to law enforcement,” Hayes told Recode.

As those low-cost and discounted security devices spread to front doors across America, they gain name recognition and thus more credibility as a deterrent with would-be thieves.

One could argue that the introduction of Ring and its fear-based social network also increases people’s perception that they need to buy such security devices in the first place, further adding to Amazon’s coffers. This can have a societal cost.

As I wrote earlier this year, fear-based social media like Amazon Ring’s Neighbors app “have become popular because of — and have aggravated — the false sense that danger is on the rise. Americans seem to think crime is getting worse, according to data from both Gallup and Pew Research Center. In fact, crime has fallen steeply in the last 25 years according to both the FBI and the Bureau of Justice Statistics.”

I’ve noticed that on Neighbors, people often complain about people taking photos of their porch. This often turns out to be the person delivering the packages and confirming the delivery with a photo, another one of Amazon’s theft prevention efforts.

As far as Amazon is concerned, that’s good business.