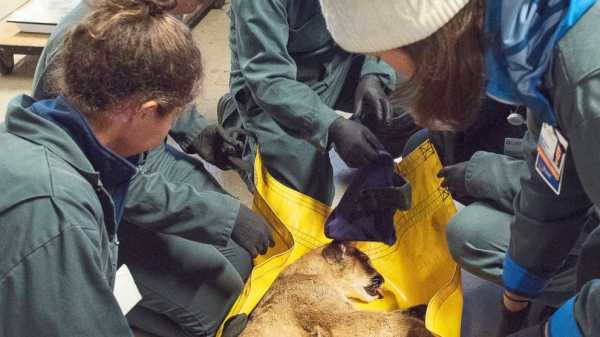 A burned mountain lion cub rescued from the largest recorded California wildfire will not be released into the wild and will instead live out its life at a wildlife-rescue center, state officials said Thursday.

Two bears also burned in the Southern California wildfire were returned to Los Padres National Forest this month. A vet caring for the mountain lion had initially said Wednesday that the mountain lion also would be released into the wild.

However, the inexperience of the cub — only 5 months old when found alone, skinny and with all four paws burned in December — makes it unlikely he could survive on his own, said Deana Clifford, a senior veterinarian with the California Fish and Wildlife Department.

Winston Vickers, a wildlife veterinarian and mountain lion expert with the University of California, Davis, said he concurs with the state decision.

“We’d always rather return animals to the wild. But I agree in this case it’s awfully hard to imagine how it could be done at this stage” of the young animal’s life, he said.

Mountain lion cubs must spend upward of 18 months with their mother in the wild, learning how to hunt and survive, Clifford said.

Adult mountain lions appear to have been able to run ahead of the wind-driven flames that ravaged California late last year. Dozens of cats already equipped with tracking collars have been accounted for, Vickers said.

A second mountain lion cub burned in the same wildfire as the other, was so emaciated and badly hurt that vets euthanized it, Clifford said.

The surviving male is being cared for by veterinarians with UC Davis, and the state wildlife agency, Clifford said.

Until 2013, California law singling out mountain lions as feared predators limited the kind of rescues, rehabilitation and returns to the wild that other injured wild animals routinely get. Wildlife officials are still developing procedures that would keep both mountain lions and humans safe in such reintroductions to the wild, and have yet to carry out the first such rehabilitation since that law was overturned.

Florida has one of the few U.S. wildlife-rehabilitation centers that release mountain lions back into nature.

In California, the surviving male cub will be taken to a wildlife rescue center where he will be slowly introduced to another mountain lion that also was rescued as a cub.

The two will live in a 100 foot-by-50-foot enclosure with brush, trees, and plenty of other things to climb on, said Doris Duncan, executive director of the Sonoma County Wildlife Rescue Center.

“We’re hoping she’ll put her angel wings around him,” Duncan said. “Make him feel welcome and not scared.”