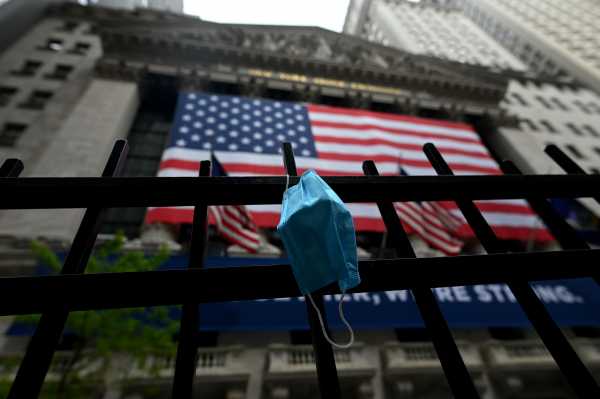 Despite a pandemic that’s shocked the entire economy and impending antitrust lawsuits, Big Tech is doing rather well. Amazon, Apple, Google, and Facebook raked in a huge amount of money last quarter: $38 billion in profits on nearly $240 billion in revenue. For the most part, this represents growth over what these companies made last year, despite the worst recession in the United States since World War II.

These numbers are striking not just for the tremendous amount of money these four companies are making but also because Amazon, Apple, Google, and Facebook seem to be defying this moment in history. Earlier this month, a long-awaited congressional report accused the companies of anti-competitive behavior, and some politicians are asking that they be broken up. Meanwhile, unemployment is double the rate it was in the beginning of the year, and numerous industries are struggling to stay afloat.

But as many of us have been stuck at home, Big Tech’s services have been more important than ever, becoming the primary way many of us interact with the outside world. So what’s been bad for restaurants, airlines, and countless other industries has been good for the world’s biggest tech companies.

In the quarter ending September 30, Amazon’s profits rose nearly 200 percent from a year earlier. Google’s profit grew about 60 percent and Facebook’s 30 percent. Even Apple, whose profits were down slightly, brought in a healthy $12.7 billion in profit.

Revenue was up for each of these companies. Amazon, which has seen its dominance rise especially sharply during the pandemic as people’s shopping habits shifted online, saw record revenue of $96 billion, a 37 percent increase compared with last year.

As a result of these earnings, Big Tech’s stocks are at or near all-time highs. This is a notable milestone, since Google, Facebook, Amazon, and Apple stock all took a big hit back in March. But unlike many other companies still suffering from that blow, these four companies’ stock prices have now more than recovered. On average, their market cap is up about 50 percent since then. Meanwhile, the Dow Jones Industrial Average is up about 5 percent (Apple is included in the index, helping buoy the whole average). 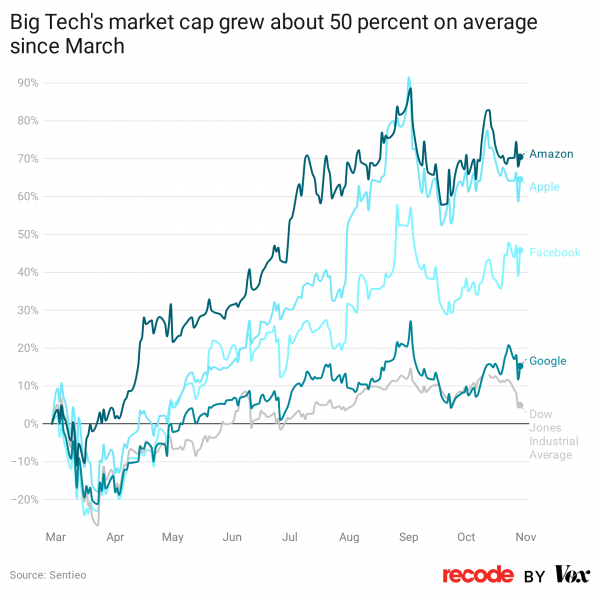 These massive numbers don’t mean much to the average person, since many Americans don’t have a real stake in the stock market. Instead, shareholders are the ones who benefit — as well as the companies themselves, who are able to reinvest these profits to become even bigger and make competition even harder. As the government ramps up its antitrust cases against Google, Apple, Amazon, and Facebook, their outsize profits are going to become more important.