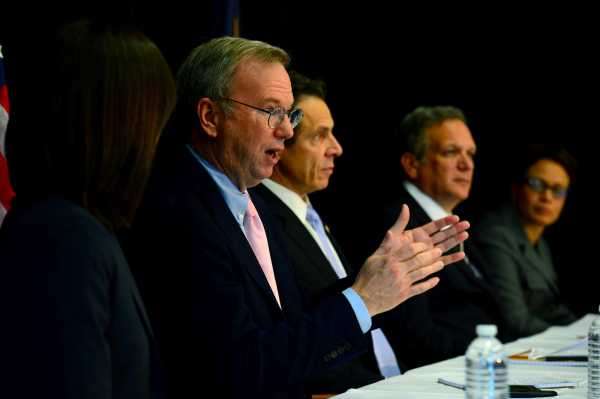 At the beginning of the pandemic, Gov. Andrew Cuomo tapped former Google CEO Eric Schmidt to help him pivot New York to the digital age.

Cuomo took the recommendation from Schmidt’s reform commission, Reimagine New York, and signed a bill that requires internet providers like Verizon to offer lower-income families basic broadband access for no more than $15 a month, a cap that Cuomo says is the first of its kind in the nation. High-speed plans will be capped at $20 a month.

About 7 million New Yorkers who currently qualify for government assistance will now have access to cheaper internet — a high-speed plan typically costs an average of more than $50 a month, Cuomo said — making it easier for them to attend online classes, communicate with family, and work from home. Americans who lack broadband access are disproportionately low-income and people of color.

“The internet is no longer optional,” Schmidt said on Friday, seated alongside Cuomo. “It’s essential to education. Think of the generation that we could be creating that are not learning because we didn’t give them the right access — and they’re the ones most at risk that need it most of all.”

The law is the most significant accomplishment to date from the Schmidt-led commission. The former Google CEO said from the beginning that the group would have three priorities: expanding broadband access, building out more capabilities for virtual medical appointments, and improving remote learning.

Schmidt is a billionaire philanthropist who splits his time among technical issues like artificial intelligence, political issues like Democratic campaigns, and the intersection of those tech and policy interests — such as ways to bridge the gap between Silicon Valley’s engineering talent and the American military.

Some New York progressives were upset when Schmidt — along with another major tech philanthropist, Bill Gates — were chosen to help guide New York’s post-coronavirus recovery, fearing it would expand the private sector’s influence. A longtime political ally of Cuomo, Schmidt praised the “extraordinary” coronavirus leadership of the New York governor, who is managing several crises, including an FBI investigation over whether he covered up the total number of Covid-19 deaths at nursing homes. Cuomo is also facing unrelated sexual harassment allegations.

In addition to the new state law, Schmidt’s philanthropic group, Schmidt Futures, is also helping to finance internet access for the next school year for up to 50,000 New York families that cannot afford the reduced $15-a-month rate. Hundreds of thousands of New Yorkers “apparently had no internet access at all,” Schmidt said.

Schmidt portrayed the commission as epitomizing the best of philanthropy and how it can collaborate with the public sector during a crisis.

“This is when New York does its best — a combination of private actors and the public doing the right thing for the benefit of all the citizens,” Schmidt said. “Governor, send us more challenges.”