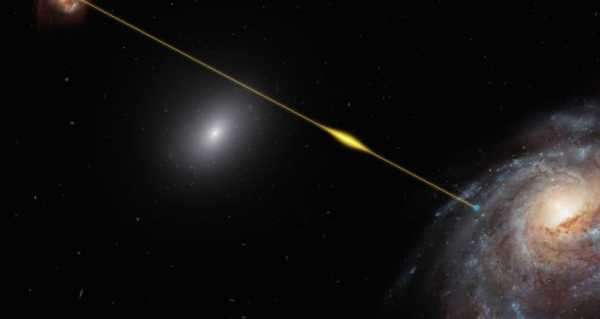 Ever since fast radio bursts were first detected over a decade ago, they have been seen in all corners of the sky, but no consensus has so far been reached about where the milliseconds-long one-off or at times iterative signals originate from.

Astronomers studying a recurrent signal from a nearby galaxy have detected radiation at the lowest frequency any fast radio burst has shown so far, with the finding bound to shed light on the origins of the enigmatic signals from the depths of space.

Conducting a pair of studies, the research group set their eyes on a signal called FRB 180916, first detected in 2018 and traced back to a galaxy some 500 million light-years away.

It appears to come in again and again at even intervals, on a 16-day cycle, chirping energetically for the span of four days before vanishing for the next 12.

In the first study, the astronomers looked into the object with two different radio telescopes – the Canada-based CHIME, which is regularly used to study FRBs, as well as the Low Frequency Array (LOFAR) in the Netherlands.

The latter enabled the team to map at least 18 bursts, milliseconds in length, at frequencies ranging from 110 to 188 MHz – far lower than levels previously struck by FRBs.

In a separate, no less stunning, discovery, the researchers took note of a significant delay between frequencies.
For instance, CHIME registered the higher frequencies, which it is responsible for, exactly three days before the lower ones were detected by LOFAR.

LOFAR ‘superterp’. This is part of the core of the extended telescope located near Exloo, Netherlands

As Jason Hessels, a co-author of the study, put it, at different points in time they “see radio bursts with different radio frequencies”.

“Possibly the FRB is part of a binary star”, he assumed, stressing that should this prove to be the case, the scientists “would have a different view at different times of where these enormously powerful bursts are generated”.

The second study examined FRB 180916 in greater detail and higher “time resolution” than previously, taking measurements on a more regular basis than other studies.

The finding thereby solidifies the leading theory about the roots of FRBs – namely magnetars, a type of neutron star distinguished by an extremely strong magnetic field enveloping it.

For instance, last year, FRB-resembling signals were detected coming from a magnetar in our own galaxy.
Whatever the case, the more studies are conducted, the more likely it becomes that clues will be found regarding the fast radio burst mystery.

In March, researchers managed to reveal the “microstructure”, or pattern, of variable brightness pertaining to FRBs, which were first detected over a decade ago.

According to the paper, published in Nature Astronomy, the team studied their signature at exceptionally minute intervals within their milliseconds-long pulses, arriving at their “emission techniques”.