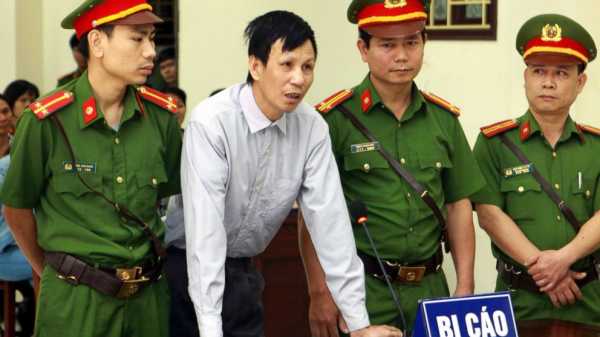 A court in Northern Vietnam dissident sentenced to 13 years in prison Tuesday, finding him guilty of attempting to overthrow the government. He was the seventh activist, who was arrested last week, as Communist authorities to intensify the fight against dissent.

The official news Agency of Vietnam Nguyen van TUC, 54, was convicted of collaborating with the banned group called the Brotherhood for democracy in a half-day trial in people’s court in Thai Binh province.

BKT also sentenced to three years of house arrest after his prison term.

VNA said the TUC joined the group in 2014 and has served as Vice-President. The group was “reactionary organization that illegally operated to attempt to abolish the leadership role of the Communist party of Vietnam and the overthrow of people’s power,” he said.

The TUC had previously been sentenced in 2009 to four years in prison for spreading anti-government propaganda.

On Thursday, six members of the group, including its co-founder, prominent human rights lawyer Nguyen van Dai, were sentenced to seven to 15 years in prison on the same charges.

Established in 2013, the group says its mission is to “fight for human rights recognized by the Vietnamese Constitution and international conventions” and the campaign “to create a progressive, democratic, equitable and civilized society in Vietnam”. The group killed about 80 members.

Despite the radical economic reforms from the mid 1980-ies, which opened the country to foreign trade and investment, and has made it one of the fastest growing economies in the region, Communist-ruled Vietnam maintains tight control on almost all aspects of society, including the media and religion.

Separately, 47 members of Vietnamese civil society groups, human rights activists and independent Media Groups wrote an open letter to the head of Facebook mark Zuckerberg, asking if he cooperates with the Vietnamese government to suppress dissent.

In the letter, published Tuesday, said that increasingly, Facebook has suspended the accounts of Vietnamese human rights defenders and citizen journalists and remove their contents. He said that the company was very helpful in the recovery accounts, and that during the trial of activists on Thursday, “lots of accounts and pages loud citizen journalists were deprived of the opportunity of the transaction”.

“While we applaud Facebook efforts to combat misinformation in open societies, your efforts with such a broad brush that it hurts communities in the closed and close spaces such as Vietnam,” the letter reads.

The signatories said they were shocked to learn that according to the Facebook Executive has agreed to cooperate with the Vietnamese government in monitoring and removal of Content.

“It would seem that following this agreement, a loud coordination with the government, which is known to suppress the expression of opinions online and the arrests of activists, the problem of account blocking and content dismantling has only grown more acute,” – said in the letter.

Asked by the associated Press for comment, Facebook said that “intends to protect the rights of people who use Facebook and for people to freely and safely yourself.”

However, he said in an email, “there are times when we may have to remove or limit access to material that violates the law in one country or another, although it does not violate our community standards.” He said it in the same way, a request to delete Content in Vietnam, as in the rest of the world.