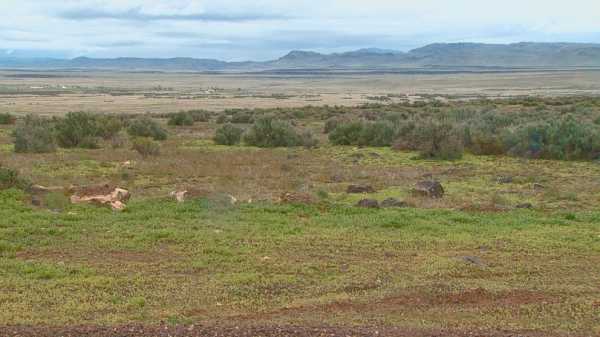 U.S. officials won’t say where the bones of the young adult and a child are being kept as the U.S. Bureau of Land Management assesses the claims by the Shoshone-Bannock Tribes in eastern Idaho, Shoshone-Paiute Tribes in southern Idaho and northern Nevada and the Nez Perce Tribe in northern Idaho.

The federal agency considers its negotiations with the tribes about the bones to be sensitive government-to-government communications, and only confirmed the discussions after The Associated Press filed a Freedom of Information Act request.

The skeletons were found in such good condition last April that Idaho authorities initially treated the southwestern Snake River Plain site as a possible crime scene. Authorities said they were either dealing with a double homicide that had happened in recent decades, bones from pioneers who died in the 19th century while traveling along the nearby Oregon Trail or the remains of Native Americans from that era or earlier.

But carbon dating tests from a lab in Florida found the young adult and the child or teen lived sometime during the 1400s to 1600s. Elmore County investigators were so surprised that they sent bone samples to be checked at another lab in Arizona, which returned similar results.

The Bureau of Land Management is using a process in the Native American Graves Protection and Repatriation Act to return the skeletons. A decision is possible this spring, said agency spokesman Michael Williamson.

“We’re giving it the time it needs and looking forward to having a decision made where all parties are satisfied,” he said.

For the tribes, it’s a matter of recovering two of their own who were among the nomadic Native Americans who experts say spent winters near Snake River Canyon and summers at higher elevation prairies — eating native plants and hunting mostly deer and rabbits but occasionally elk and bison.

“We’ve always pointed out that we’ve been here for thousands of years,” Shoshone-Paiute Tribes Chairman Ted Howard said after the age of the bones was disclosed. “For our tribe and the Shoshone-Bannock Tribes, those are the remains of our people, our ancestors.”

Kayeloni Scott, communications director for the Nez Perce Tribe, said her tribe has historically been present in the area where the skeletons were found.

“That’s why we’re speaking on behalf of the bones,” she said in a voicemail. “Also, the primary reason was just to make sure someone was taking care of them, and they weren’t just being left alone.”

The land management bureau confirmed that the Shoshone-Bannock Tribes is the third with a claim for the bones. Tribe spokeswoman Randy’L Teton did not return a telephone message seeking comment.

The tribes don’t let researchers conduct tests on remains of ancestors and anthropologists say the unique nature of the find means that experts are losing an opportunity to learn more about how Native Americans lived in a place where the first documented visit by outsiders was in 1805.

The skeletons were discovered in dry sagebrush steppe by an Idaho Department of Fish and Game worker checking ground squirrel hunters’ licenses about 5 miles (8 kilometers) from the small city of Mountain Home. A badger digging into the squirrels’ burrows apparently exposed some bones.

Law enforcement authorities who treated the find as a crime scene reported finding no prehistoric items with the bones — such as stone tools or beads.

But anthropologists say evidence of how the two had lived might have been found by trained experts if the area had also been treated from the onset as a possible anthropological site. There are fewer than a dozen known Native American burial sites on the Snake River Plain, and this site was unique because none of the other sites have had the remains of more than one person.

“If there had been any indication at the outset that this was a prehistoric internment, a much more systematic process would have been conducted,” said Mark Plew, an anthropology professor at Boise State University. “These inadvertent discoveries often go into a black hole.”

Law enforcement officials after finding out the approximate age of the bones had no more testing conducted because it is costly and can involve destruction of bone material.

But Plew said a more thorough examination of the bones with isotope analysis and by anthropologists could reveal the gender of the two, what they ate, whether they had survived periods of famine and possibly their cause or causes of death.

“The opportunities are rare,” he said. “As these go away, the opportunity to do that kind of research is lost.”

For the tribes, trying to recover the remains “is a very emotional process,” said Pei-Lin Yu, a Boise State anthropology assistant professor who previously worked as a federal government official on projects to return Native American bones to tribes. The age of the bones doesn’t matter to them, she said.

“Time doesn’t actually figure into their feelings of association and responsibility as stewards of their ancestors,” Yu said.