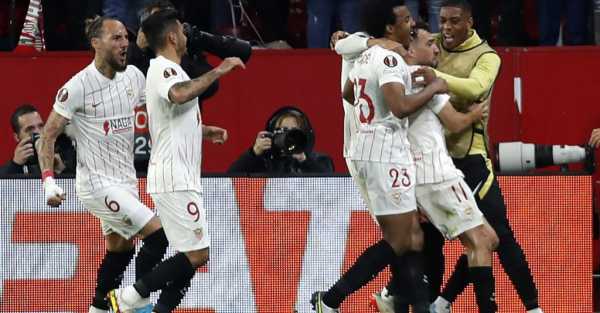 A second-half goal by Moroccan forward Munir, who was only in the starting line-up after Ivan Rakitic was injured in the warm-up, settled the first leg in the Spanish side’s favour.

But Hammers boss David Moyes will have seen enough to feel his side are capable of overturning a one-goal deficit at the London Stadium in a week’s time and prolonging their European adventure.

It says a lot about how far West have have come in a short space of time that it was four years ago to the day since they were beaten 3-0 at home by Burnley in a game marred by pitch invasions and protests against the owners.

Now the Hammers are rubbing shoulders with the continent’s elite and stepping out for the club’s biggest night on the European stage since 1981.

This was probably the toughest draw they could have landed in the round of 16, given Sevilla are the most successful team in the tournament’s history as six-time winners – regularly knocking out English clubs along the way – as well as being Real Madrid’s closest challengers for the LaLiga title.

Julen Lopetegui’s side have lost just twice in the league all season and have the best defensive record in the division, conceding just 18 goals in 27 games.

But they have a host of injury absentees and suffered another blow when the dangerous former Barcelona midfielder Rakitic was ruled out on his 34th birthday.

The Hammers were without injured top-scorer Jarrod Bowen, but Declan Rice returned from illness to captain the team at a raucous Ramon Sanchez Pizjuan Stadium.

Munir should have opened the scoring inside the first five minutes, but he headed Marcos Acuna’s cross wide from in front of goal.

The Croatian had a free header six yards out but planted it too close to Sevilla goalkeeper Yassine Bounou, who stuck out a hand to make a stunning reaction save.

Sevilla were moving the ball around slickly and Munir got in again after being played through by Oliver Torres but rolled his shot wide, before Alphonse Areola saved a header from Youssef En-Nesyri.

But the Hammers were still giving as good as they got, with Vlasic forcing a low save from Bounou with a near-post drive before half-time.

After the break Michail Antonio laid the ball back to the edge of the area from where Tomas Soucek hit a rising drive which Bonou palmed clear.

But Sevilla remained the clearer threat and Munir volleyed over before En-Nesyri headed another decent opportunity straight at Areola.

The home fans took the noise levels up from loud to deafening and it had its effect when their side took the lead on the hour mark.

After Kurt Zouma was booked for a foul in a dangerous position, Acuna swung over a free-kick which found Munir, who steered a wonderful side-footed volley home at the far post.

West Ham needed to keep their composure, and they were relieved to see a Jesus Corona volley deflected wide.

Nevertheless, the visitors still had a puncher’s chance and substitute Said Benrahma almost set up an equaliser for Pablo Fornals, who was only denied by a last-ditch block from former Manchester City full-back Jesus Navas to preserve Sevilla’s narrow lead in a tie which West Ham will feel they are still very much in.