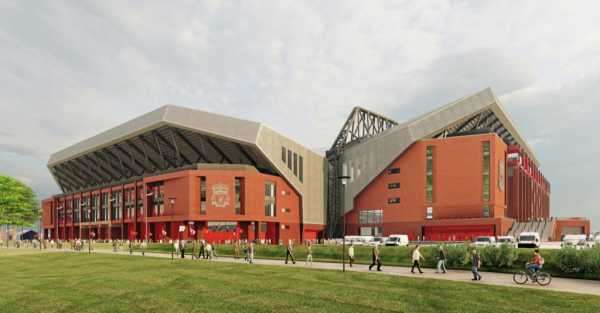 Liverpool’s Anfield Road End redevelopment remains on track to open for the 2023-24 season but the construction company leading the build admits to having concerns about the impact the current global situation may have on future progress.

It has been six months since manager Jurgen Klopp first put a spade in the ground at the ceremonial start of the work to add an additional 7,000 seats.

With all the foundation work now in place over the next two to three months the major steel works will go up as the project to raise Anfield’s capacity to 61,000 takes shape.

However, it is understood the war in Ukraine has left construction group Buckingham “nervous” about the supply of labour.

“We have some concerns as a lot of our workforce will come from Eastern Europe: Poland, the Czech Republic and Romania,” project director Colin Roddy told the PA news agency.

There is already a labour shortage in the UK but Roddy remains confident contingencies are in place to see them past any issues going forward.

Liverpool’s managing director Andy Hughes could not be happier that the project remains on schedule and on budget.

“Absolutely delighted,” he said. “The most important thing is we are on track.

“It’s been a complicated winter, we’ve had some poor weather, but I’m really pleased with the work Buckingham have done, matchdays have gone well, so it’s all great news.

“It’s what we planned for but it is good news. Obviously things could go wrong, the supply situation is very difficult, so we were really pleased with their contingency planning.

“You can’t plan for every possible contingency, there could be some unknown in there, but assuming there are no major disasters we will open at the start of the 2023-24 season.”

Last month the club announced a better-than-expected £4.8 million (€5.7 million)loss in their annual accounts, following a £41.5 million Covid-impacted deficit from the previous season, but funding for the stadium project is ring-fenced and unaffected by recent financial results.

“We are on budget. We went into the pandemic in a pretty strong financial position, and we have come out of it in a strong position,” said Hughes.

“It was challenging, but we are in a good place.”