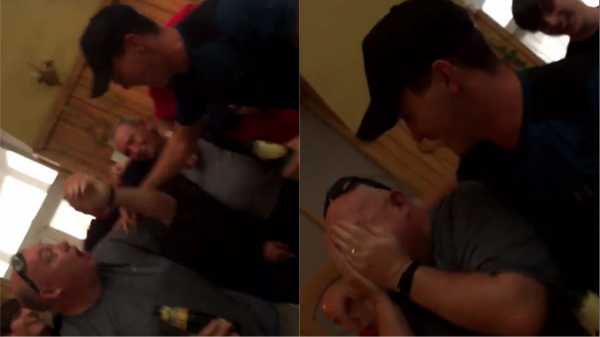 A Liverpool fan was left crying tears of joy after his son surprised him in Kiev for the Champions League final.

Sean Quinn, 24, had been backpacking in Australia, but travelled for three days to make it to the Ukrainian capital to see the Reds face off against Real Madrid – and to surprise his overjoyed dad, Bill.

Sean surprised Bill while he was posing for a photo, saying: “I hope you’ve changed enough money for us Bilbo.”

Bill’s wonderful reaction was met with cheers from their friends, and the father and son, both originally from Liverpool, embraced after it had all sunk in.

Posted to Twitter by Sean, the video has been shared thousands of times and has more than 15,000 likes.

Liverpool face Real Madrid in the Uefa Champions League final in Kiev at 7.45pm on Saturday.