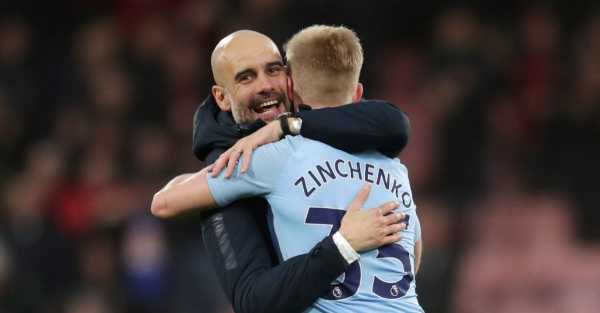 Pep Guardiola has revealed Oleksandr Zinchenko will be available for Manchester City’s trip to Everton on Saturday but said the Ukraine international was understandably deeply worried about this crisis in his home country.

The 25-year-old Zinchenko attended a demonstration in Manchester city centre on Thursday evening following the invasion of his home country by Russian forces.

“He is worried,” Guardiola said. “What would we feel if in our country where we were born and have family and friends innocent people are being killed? How will you feel? I guess that’s what he feels. Of course, the team and the club is close to him, unconditionally of course.

“Oleks is an incredible, strong guy. Of course it’s not easy at the moment but playing in the training session yesterday he was brilliant so he’s ready to play in case he has to play.”

Guardiola said he had spoken both with the squad as a whole and with Zinchenko individually, noting too that club captain Fernandinho – who joined City from Shakhtar Donetsk in 2013 – still has friends in Ukraine.

Earlier this week, Zinchenko – who has 45 caps for Ukraine – posted on Instagram to say: “The whole civilised world is worried about the situation in my country. I can’t stay back and I strive to put my point across.”

And Guardiola added that he had no problem with Zinchenko’s decision to attend Thursday’s protest.

City are looking to bounce back after last weekend’s 3-2 home defeat to Tottenham allowed Liverpool to close a gap at the top that had been 13 points to just three having played their games in hand.

“It’s ridiculous – we were never champions in January or February,” Guardiola said. “It’s what is next to try to win the next game. The rivals are good, not just Liverpool.

“I could not expect it to be like this at the start of the season, it’s better than I thought at the beginning of season.

“To try to attack and find solutions is not easy. Every time we wake up and go training, we try to do better, otherwise it would be so boring. We want to be there and this is what I want from my team.”

Saturday’s defeat ended a 15-game unbeaten run in the league since the 2-0 home defeat to Crystal Palace in October 30, a run that included 14 victories and the 1-1 draw at Southampton last month.

“I know how we performed after last time we dropped points,” Guardiola added.

“I think the players know why we were not able to win, now we trained really well, we focus on the game tomorrow, then FA Cup (away to Peterborough on Tuesday), the derby (next weekend), and the Champions League.

“People said a few days ago we were perfect but I said all along there were many things to improve.”