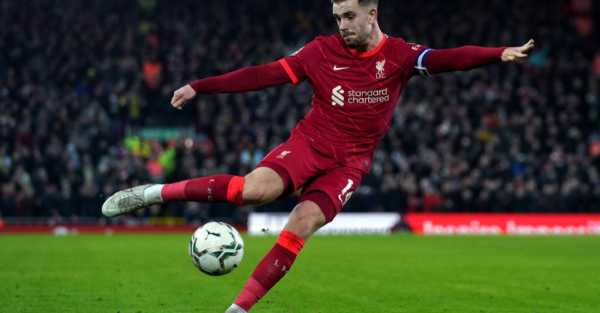 Jurgen Klopp’s side are currently still competing on four fronts and Sunday’s Wembley meeting with Chelsea could open the door to an unprecedented quadruple.

Having secured a first league title in 30 years and the Club World Cup the season after lifting the Reds’ sixth European Cup, Henderson knows how important trophy-winning momentum can be.

“I think it is a big moment in the season. To get a trophy so early on in the season can give the squad a big boost,” he said.

“It’s a cup final and one we want to win so we’ll do absolutely everything to make sure we bring the trophy home.

“We want to use it as a platform to give us a big confidence boost going towards the business end of the season.

“There are some big games coming up and we have to take each game as it comes, as we always do, and see where we are at the end of the season.

“Yes we are still in all four but that can change very quickly. Sunday, whether we win or not, that’s done.

“Then the other ones you can be out of it very quickly if you don’t perform very well. I know how quickly football can change.

“At the minute we are in a very good moment and we need to continue on that path right until the end of the season.”

Henderson is the only survivor from the club’s last domestic cup victory in 2012 when, as a 21-year-old, he helped Liverpool beat Cardiff on penalties at Wembley.

Since then he has gone on to become the club’s captain and lift the Champions League and Premier League trophies.

“I never see it as achieving it on my own. I’ve achieved it with great players and managers,” he added.

“Everyone at the club who has played their part. I’ve been a very small part of that.

“For me the focus is always the same: try to improve every single day, try to give everything for this club for this team to be as successful as possible.

“Whether you lose or whether you win, that will never change for me.”