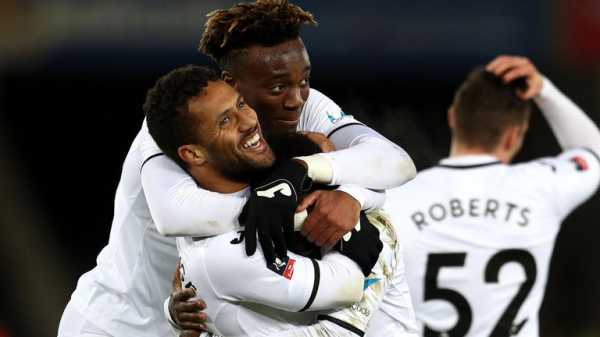 Noor Husin gave County brief hope, making it 3-1 after 35 minutes, but the Sky Bet League Two promotion contenders were blown away on a freezing night in south Wales.

It also gave County an unwanted spot in Swansea history, the margin of defeat bigger than the 7-2 and 6-1 FA Cup scorelines inflicted on Folkestone and Rhyl.

Carvalhal had called for Abraham to show a marked improvement after going 14 games without scoring, and the England striker duly responded with his first goals for nearly four months.

Swansea showed their intent in the opening exchanges when Adam Collin saved from Abraham and Dyer, but the County goalkeeper was beaten after 18 minutes.

Naughton and Luciano Narsingh combined down the right and Abraham was picked out to sweep home his first goal since October 14. 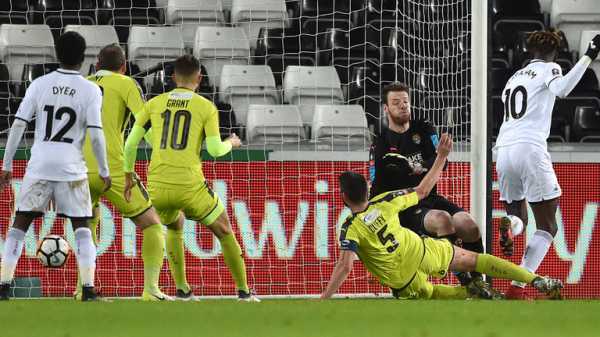 Dyer’s next, however, took only 10 more minutes to arrive with the lively Narsingh again making a telling contribution.

Mike van der Hoorn should have extended the lead from Carroll’s corner, rising above former Swan Richard Duffy but heading over from six yards.

And County were given hope when Husin fired home from the edge of the box after Swansea had failed to clear their area.

The goal was allowed to stand after Martin Atkinson had checked with the Video Assistant Referee to see whether a couple of County players, standing in offside positions, were obscuring the view of Swans goalkeeper Kristoffer Nordfeldt. 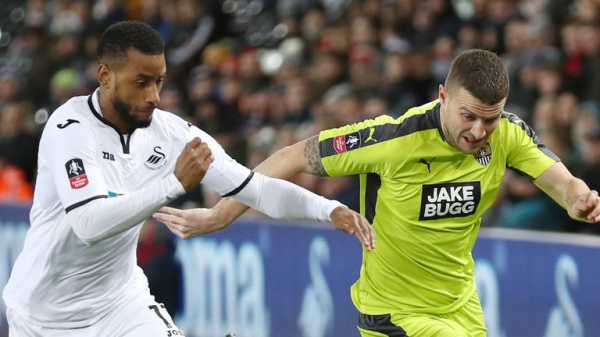 Jorge Grant almost reduced the deficit further, but Nordfeldt pushed away his half-volley and Swansea restored their three-goal advantage in the second minute of stoppage time.

Kyle Bartley’s raking pass sent Narsingh scampering down the right again and he fed Abraham, who converted with another firm finish.

Collin was not so competent dealing with Carroll’s 53rd-minute corner and the loose ball to Naughton, who lashed home only his second Swansea goal.

Routledge grabbed the sixth – and his first of the season – four minutes later with a delightful curled finish from just inside the box.

Carroll struck the goal of the night after 65 minutes when his 25-yard stunner left Collin grasping at thin air, before James’ strike secured Swansea their biggest home win since moving to the Liberty Stadium in 2005.