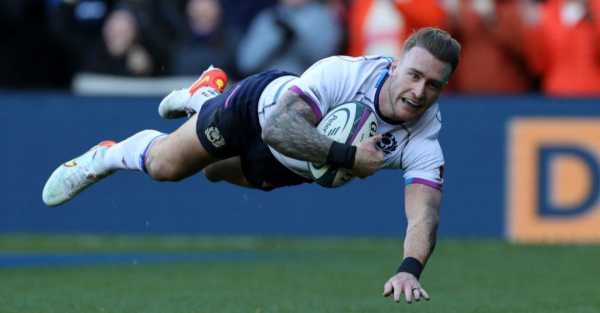 Stuart Hogg has challenged Scotland to round off their autumn campaign with a complete performance and a victory over Japan.

The Scots have won two of their three Tests so far – against Tonga and Australia – and lost to South Africa last weekend.

Captain Hogg does not feel they have quite hit their top performance levels for a sustained period in any of those matches and is hopeful that everything will come together at Murrayfield on Saturday.

He said: “I want to see us perform to the best of our ability. If I’m being honest, we’re yet to have a complete performance both sides of the ball.

“But we’ve learned a huge amount throughout these last three games, so hopefully on Saturday it will be the case (a complete performance).”

Ultimately Hogg knows a victory is the priority, but the skipper is anticipating an entertaining match between two teams who like to play fast, free-flowing rugby.

He said: “We just want to win. We have a gameplan – a way we want to play – but the most important thing is we win the game. Having said that, I know exactly what we’re about and how we want to play the game, so it will be exciting.

“It will be end to end, side to side, exactly what we want. Hopefully we can put on a performance that we’re proud of, that the nation’s proud of, and that gets everybody at BT Murrayfield on their feet.”

Saturday’s match is the first meeting between the teams since Japan ended Scotland’s participation at the 2019 World Cup by defeating Gregor Townsend’s side 28-21 in a group-stage match in Yokohama.

Hogg is one of seven players who started that match a little over two years ago who will also start this weekend.

He said: “We know Japan are a quality side. They’ve been building for a number of years and we know from the World Cup exactly what they’re about.

“But that game was ages ago. We’ve gained some valuable experience individually and collectively since then. Every time we play we learn new things. We want to kick on in this match. We want everyone to be the best version of themselves.”