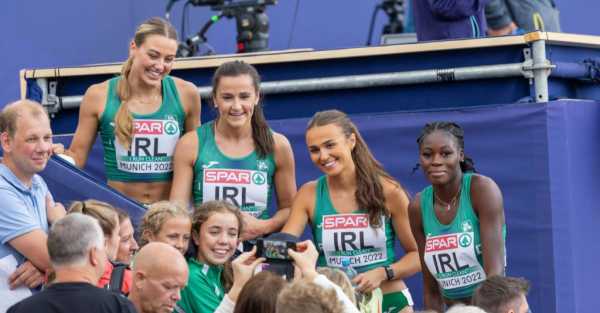 The Netherlands, fired on by superstar Femke Bol took the victory and gold medal.

Louise Shanahan finished 8th in the final of the 800 metres in a time of 2 minutes 1 point 6 4 seconds.

Michelle Finn has finished in 14th place in the women’s three-thousand-metres steeplechase in Munich.

Tottenham have claimed a 1-0 win against Wolves, maintaining their unbeaten start to the Premier League season.

Harry Kane scored his 185th goal for Spurs – meaning he has got the most goals for a single club in the history of the competition.

Everton scored late to avoid a third straight defeat at the start of the Premier League season and draw 1-all with Nottingham Forest.

Demarai Gray equalised in the 88th minute after Brennan Johnson gave their opponents the lead in a hectic finish at Goodison Park.

Southampton came back from a goal down to claim a 2-1 victory over Leicester and Crystal Palace triumphed 3-1 against Aston Villa.

Arsenal have continued their 100 per cent start to the Premier League season with a 3-0 victory at Bournemouth.

It follows wins over Leicester and Crystal Palace so far.

A Martin Odegaard double and a strike from William Saliba made it three wins from three for the Gunners.

Hull’s unbeaten start to the Championship season came to a crashing end with a 5-2 defeat at West Brom.

But Watford are yet to lose since dropping back to the second tier following a goalless draw away to Preston.

Wigan beat Birmingham and Sunderland got the better of Stoke by the same score, while Luton triumphed 2-nil at Swansea.

Burnley played out an entertaining 3-all draw with Blackpool and QPR-Rotherham ended 1-1.

With leaders Shelbourne in Champions League qualifier action this weekend, Wexford Youths have the chance to close the gap to two-points this evening.

Ireland have beaten Japan 57-22 in the first Test of their two-game summer tour.

It’s all going wrong for the Irish on moving day of the BMW Championship in Delaware this evening.

Rory McIlroy is 1 over par thru 6 holes today to move back to 5 over par for the tournament.

Shane Lowry has dropped three shots to stand 3 over after 9 and 2 under for the week.

Seamus Power now 3 over par after 13 holes today which moves him back to even all round.

British boxer Anthony Joshua says he’s ready to go the distance with Oleksandr Usyk ((pron: oo-sick)) as he aims to win back his heavyweight titles.

The pair meet in Saudi Arabia tonight in a rematch of last September’s fight, which saw the Ukrainian leave London with the WBO, WBA and IBF belts.

Both are weighing in heavier than on that occasion with the ringwalks expected at around half past 10.20