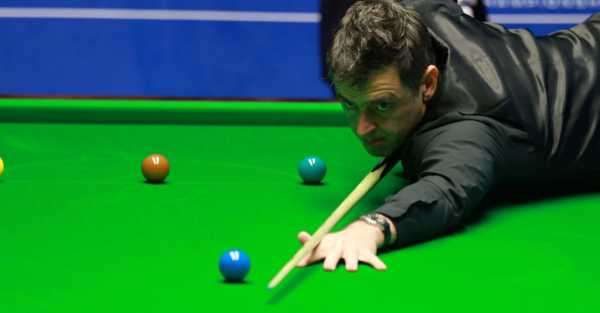 Ronnie O’Sullivan continued to home in on a record-equalling seventh Crucible title on a day when a pigeon fluttered onto centre stage at the World Snooker Championship in Sheffield.

The avian interloper flew down from the rafters and briefly alighted on the bottom cushion as Yan Bingtao prepared to break off in the sixth frame of his afternoon match against defending champion Mark Selby.

It was ushered out via the players’ entrance, past a startled Selby who was returning to the arena, and tournament officials later confirmed it had been captured and released unharmed.

Later, O’Sullivan showed just how much he fancies emulating Stephen Hendry’s record as he soared into a 12-4 lead over Mark Allen, meaning he needs just one more frame from their concluding session on Saturday to reach the last eight for the 20th time.

O’Sullivan started the match by threatening a maximum break after potting 10 reds and nine blacks, and posted a further break of 131 as he cruised into a 6-2 lead at the end of the morning session.

Allen won the first frame upon the evening resumption but missed the simplest of pinks with the frame at his mercy in the next, and the mistake proved pivotal as O’Sullivan cleared for 7-3 and would never look back.

O’Sullivan got 88 points into another possible 147 in the next before running out of position, then capitalised on a pair of costly errors by his opponent to raise the real prospect of wrapping up his last-eight place with a session to space.

Allen prevented that embarrassment with a gutsy break of 110 but O’Sullivan took the final two frames of the evening – the last his second century of the match – to make his progression on Saturday a formality.

Earlier, Mark Williams did move into the last eight with a session to spare, wrapping up a dominant 13-3 win over 20-year-old Jackson Page, who trains at the three-time champion’s club in Tredegar.

Williams produced some of the best form of his career to compile six centuries and eight further breaks of 50-plus as he rendered Friday night’s scheduled concluding session obsolete.

And he revealed he had piled on the agony for his young opponent, whom he had also fleeced in a card game on the eve of what turned out to be the concluding session of their match.

“We had dinner on Thursday night and a game of cards in the hotel reception – I took £15 off him,” revealed Williams. “We will do the same thing again after this match – just chill out.

“If it was anybody else, I’d love to have won with a session to spare. I don’t feel like that playing Jackson. It’s a good learning curve for him and we will see how he bounces back.”

Shell-shocked Page called Williams’ form “ridiculous” but the 47-year-old sought to play down his chances of a fourth crown, insisting: “I ain’t a championship contender. I can’t play much better than that at my age. I cannot improve.”

Opening with a break of 110 to move further in front, Williams then snatched the 10th frame with a clearance to black after Page missed the last red to leave him stranded on a highest break of 69.

Two half-centuries in the next frame made it 10-1 for Williams, who was fulfilling his tongue-in-cheek claim that he wanted to “destroy” Page, who set up the meeting with an impressive first-round success over Barry Hawkins.

Page got a second frame on the board but Williams was merciless, firing back-to-back centuries and then, after Page clawed back another frame, finishing with a 56 to book a last-eight meeting with either Selby or Bingtao.

Selby twice fought back from two frames behind to end the opening session against former Masters champion Bingtao all square at 4-4, ahead of the final two sessions of their match on Saturday.

Stephen Maguire is two frames away from the quarter-finals after surging to an 11-5 lead over reigning UK champion Zhao Xintong ahead of their concluding session on Saturday.