Referee Jon Moss has admitted that asking the fourth official if he had seen a crucial moment on “TV” in Sunday’s Liverpool v Tottenham game was “misguided” – but says the correct decision was still made.

With the game entering its final minutes and the score 1-1, a thrilling Premier League encounter became mired in controversy when Moss gave Spurs a penalty for a foul on Harry Kane by the home side’s goalkeeper Lorius Karius. 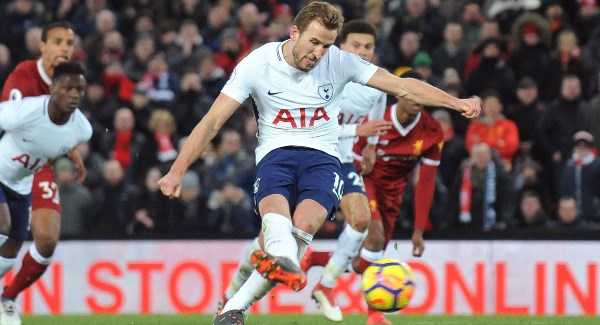 The England and Spurs striker was clearly in an offside position when the ball was passed to him but Reds defender Dejan Lovren inadvertently played him on by getting a faint touch when he tried to hack it clear.

Kane was then upended by Karius, although many Liverpool fans and players believe there was little contact.

Moss, on the other hand, was sure it was a foul but seemed to have doubts about whether Kane was onside or not. He then spent several moments discussing it with his linesman Eddie Smart and their conversation was picked up by a pitch-side microphone.

In their exchange, Smart is heard twice asking if Lovren touched the ball, as that would be a “deliberate action” and make Kane onside when he actually received the pass.

Moss twice tells Smart he does not know if Lovren touched it or not and is heard asking fourth official Martin Atkinson, via his headset, if he “got anything from TV”, only to almost immediately say “I’m giving the penalty” and point to the spot.

This prompted many observers at the game, and the pundits on the BBC’s Match of the Day 2 programme, to wonder if this decision was effectively awarded by video review despite the Premier League not yet using the system.

That, however, has now been denied by the Professional Game Match Officials Ltd (PGMO), the body set up to provide, represent and train officials when they went professional in 2001.

In a statement, a PGMO spokesman explained Moss was in a “good position” to see that a Liverpool player had touched the ball before it reached Kane but “given the speed of the attack” was uncertain of who it was.

Smart, the spokesman said, saw Kane was offside so “correctly sought clarification” on whether Lovren had touched it.

“He then asked a question to his fourth official Martin Atkinson and acknowledges that referencing ‘TV’ was misguided. Atkinson did not reply to the question and so had no involvement in the decision.

“Having properly reflected on the questions asked, Jon knew a Liverpool player, now identified as Lovren, had played the ball and that no offside offence had occurred. He then awarded the penalty.

“For the avoidance of doubt, Atkinson did not view a television monitor and did not relay any information to the on-field officials.

“In real time this was a difficult series of decisions which the match officials judged correctly in recognising that Kane was not offside, as Lovren had deliberately played the ball, and he was fouled for the award of the penalty kick.”

As it happened, Kane’s penalty was saved by Karius, only for Mohamed Salah to score what looked like an added-time winner for Liverpool and Kane to then get a second chance from the spot, three minutes later, which he converted to give Spurs a deserved 2-2 draw.