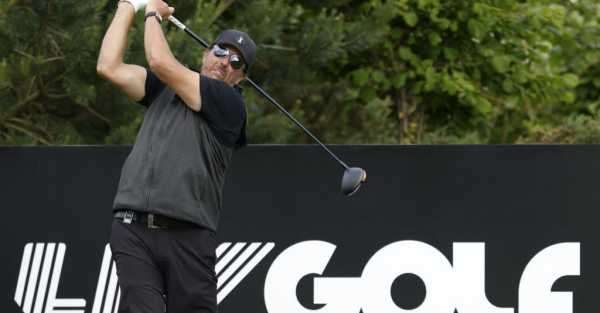 However, just 30 minutes after play started, the PGA Tour announced it was suspending the 17 players in the field who were taking part despite having been refused permission.

What did the PGA Tour say?

Commissioner Jay Monahan had consistently said players who competed on a rival circuit without the proper releases would face sanctions, and he proved as good as his word with the rebels handed immediate suspensions. Also, those who had already resigned their PGA Tour membership were told they would not be able to exploit a potential loophole and play PGA Tour events as a non-member on sponsor’s exemptions.

How did LIV Golf respond?

Unsurprisingly LIV Golf bosses were not happy, labelling the Tour’s stance “vindictive” and pledging that “this certainly is not the last word on this topic”. A statement added: “The era of free agency is beginning as we are proud to have a full field of players joining us in London, and beyond.” LIV Golf CEO Greg Norman had previously vowed to “defend, reimburse and represent” any players sanctioned.

What about the Ryder Cup and the majors?

The USGA announced on Tuesday that it would not prevent players who were already exempt from playing in next week’s US Open, saying it would not be “appropriate, nor fair” to change the entry criteria once established.

The R&A is expected to take the same approach regarding July’s Open Championship, but the USGA statement did not address what may happen in the future. By resigning his membership, Dustin Johnson made himself ineligible for the Ryder Cup, but Mickelson is adamant he will retain his Lifetime Membership.

The PGA of America will therefore need to decide if suspended players can play in Rome next year. European players remain eligible via membership of the DP World Tour, which continued to make no public comment on its stance.

Was the opening day a success on the course?

Fears of poor ticket sales, which had seen players offering free tickets on social media, proved unfounded, although tournament officials would not say how close they had come to achieving their maximum of 8,000. Viewing figures on YouTube consistently hovered between 90,000 and 100,000 and the broadcast suffered no major blunders.

LIV Golf is set to formally apply for its events to be allowed to award world ranking points, which would be a big plus as a player’s world ranking can secure entry into the majors. Kevin Na said the reason behind resigning his PGA Tour membership was to avoid a legal battle with the Tour, but LIV Golf is not likely to be so reticent and it would be no surprise if an anti-trust lawsuit was filed on behalf of the players. Ian Poulter said he intended to appeal against his suspension.