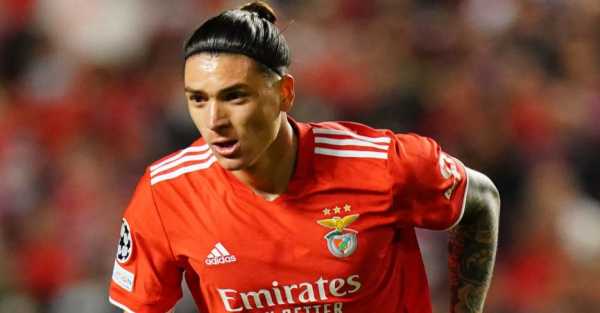 Despite reports that 22-year-old Benfica striker Darwin Nunez has agreed personal terms with Liverpool, the Daily Express writes that his agent will meet with Manchester United, who are looking to block the move to Anfield.

Meanwhile, Liverpool are expecting Bayern Munich to accept their valuation of more than £40million (€46 million) for 30-year-old forward Sadio Mane, according to The Daily Telegraph.

The same paper writes that “Europe’s top clubs” believe Raheem Sterling is ready to leave Manchester City in this transfer window. The 27-year-old has a year left on his contract, but the paper reports Chelsea are among those considering a bid.

And The Guardian reports Leeds and Aston Villa have opened talks with 18-year-old Sonny Perkins, who has made three first-team appearances for West Ham.