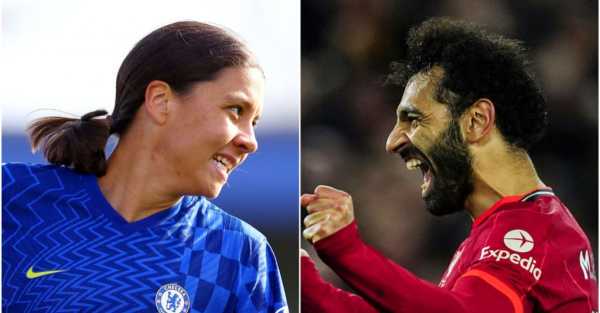 Voted for by PFA members, Salah topped the poll ahead of Belgian playmaker Kevin De Bruyne, who had won for the previous two years and was again an integral part of the Manchester City team which claimed the Premier League title ahead of Liverpool by just one point.

Salah takes the PFA player of the year trophy for a second time, having previously won in 2018, after helping drive Jurgen Klopp’s men to success in both the Caraboa Cup and FA Cup, as well as reaching the Champions League final, where they lost to Real Madrid.

Egypt international Salah finished as the Premier League’s joint top-scorer alongside Tottenham’s Son Heung-min with 23 goals and was announced as the PFA men’s player of the year at a virtual ceremony on June 9.

“It’s a great honour to win a trophy, individual or collective and this one is big so, very happy and very proud of that,” said Salah, who was also voted the men’s footballer of the year by the Footballer Writers’ Association.

“This one is a really good one to win, especially because it’s voted by players. It shows you that you’ve worked really hard and you get what you worked for.

“I have my room with trophies in a cabinet and I made sure that I had another space for one more. I always keep space and just try to imagine that the trophies are going to come.”

“It’s a massive honour I think, whenever you’re voted by your peers. I think that’s the highest honour as a player so, it’s an amazing feeling,” said Australia international Kerr, who was also named the FWA’s women’s footballer of the year.

Arsenal’s Dutch forward Vivianne Miedema and her Gunners team-mate Kim Little were also on the PFA shortlist along with Manchester City’s Alex Greenwood and Hemp as well as Chelsea’s Pernille Harder.

“I’m really honoured to be honest, especially to win it back-to-back, it shows that I’ve come a long way this year with the consistency of my game,” Foden said.

“Hopefully I can win the main award in the future, but it’s all about taking small steps and improving.”

“It’s an honour to get this again. I think especially for it to be voted for by players that I’ve played against and come up against,” Hemp, 21, said.

“I look to many of them as role models as well so it’s an honour to be picked from them. I’m going to keep working hard for that to make sure that I continue on the right path.”

“I never won any trophies as a player unfortunately, so it is nice to be recognised by fellow professionals. It will have pride of place,” said Hodgson, 74, who left his role with Watford at the end of the season having taken over in January.

Brighton women’s manager Powell added: “I feel lucky and blessed to be in the game after many years.”