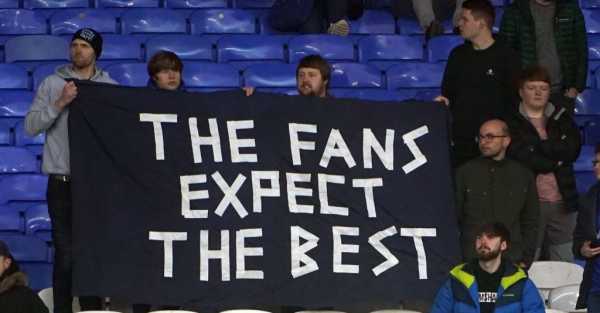 A week on from the sacking of Rafael Benitez and Everton’s situation appears to have got worse rather than better.

Fan favourite Duncan Ferguson suffered defeat at the start of his second spell as caretaker manager with supporters now openly protesting against the administration for what they perceive is a lack of clear strategy or ambition.

At least half-a-dozen names – some from left-field like Fabio Cannavaro – have been thrown into the hat to become Everton’s seventh permanent manager in six years with no apparent associated pattern or philosophy, while the club’s downward spiral into a relegation battle continues.

Here the PA news agency looks at how things are still deteriorating at Goodison Park.

Where to start? Getting rid of an unpopular and failing manager in Benitez barely addressed the immediate problem.

Saturday’s home loss to Aston Villa was a 10th defeat in the last 13 league matches and their relegation rivals have all picked up more points during that time, leaving the Toffees just four points outside the bottom three.

Plus, there is still no sign of a new manager being appointed.

What’s taking so long on the manager front?

Well, the club have no director of football, head of recruitment or scouting chief – so effectively no expert football knowledge at the top of the club.

Owner Farhad Moshiri looks like having the final say once again, as he did with Benitez.

One man making the decision should make it straightforward though…

Not quite. Moshiri appears to be being advised by friend and agent Kia Joorabchian, who was in the directors’ box at Goodison Park on Saturday with his clients Philippe Coutinho and Douglas Luiz playing for Villa.

However, Everton chairman Bill Kenwright – despite not wielding the power since selling virtually all his shares in Moshiri’s 2016 buy out – is still keen to exert some influence at boardroom level.

The number of names linked to the vacancy is in double figures with at least half-a-dozen seen as genuine contenders.

The issue is Everton do not seem to have a clear idea in which direction the club want to go, complicated by the fact the manager they need to get them out of trouble may not be the man to deliver a longer-term plan.

So who are we talking about?

Former manager Roberto Martinez was the early favourite but the current Belgium coach will not be released by his employers.

Ex-Bayern Munich manager Niko Kovac was on the list, Cannavaro, who has only managed in the Middle East and China, was interviewed and now the perennially-linked former Porto boss Vitor Pereira appears to have moved to the front of the queue.

All but Martinez, who has previous experience keeping Wigan in the top flight, appear ill-equipped for a Premier League relegation scrap.

How are the fans feeling?

Angry and worried. Even though they were delighted to see Ferguson back on the touchline injecting some passion into the side and while the problems with managerial appointments are symptomatic of the malaise, the issues run deeper.

Everton’s last trophy was in 1995 and their current predicament is the culmination of a decline which – despite more than half-a-billion pounds spent on players – has been in effect since Martinez guided them to fifth place in 2014.

Around 150 to 200 fans staged a sit-in protest at the weekend and that number is likely to grow aligned to the level of discontent.