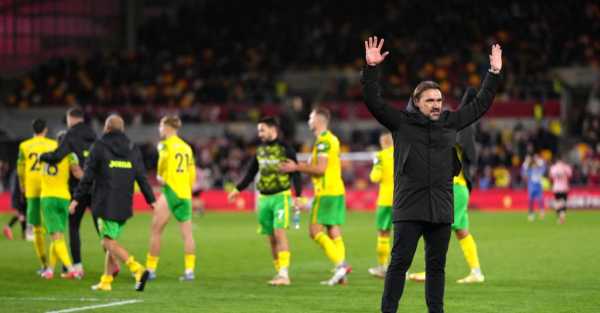 Farke was axed as head coach just hours after overseeing the Canaries’ first Premier League victory of the season at Brentford.

There were emotional scenes at the final whistle as fans, players and coaching staff celebrated the 2-1 battling win.

And many of City’s players took to social media to thank Farke for what he achieved during his four years at the club.

“From our very first conversation we agreed we wanted this club in the Premier League,” wrote Todd Cantwell on Instagram.

“As a local lad, Norwich City means so much to me and we owe a lot to the manager for what he had done to the club and the memories he has made alongside the players.

“We did achieve our goal. Thank you.”

Full-back Max Aarons said: “Boss, thank you for helping me realise my dream. Through everything, you have given me this opportunity and been there for me no matter what.

“Good luck in everything you do in the future. Thank you for everything boss.”

Defender Ben Gibson, who captained the side at Brentford, wrote: “Boss – you believed in me when it seemed like nobody else did. The memories will never be forgotten, thank you.”

And goalkeeper Tim Krul tweeted: “Thanks for everything boss. It has been a rollercoaster ride. But you and the staff gave me the chance to restart my career. And for that I’m forever grateful.

“Wish you all the best for the future. Thanks again for all the memories.”

Frank Lampard, Chris Hughton and Russell Martin are among the names being linked with the role.

But the Bees could not find an equaliser and slipped to a fourth-straight league defeat.

“I always take one game at a time. If we take three points against Chelsea and lose today or vice versa, that’s the same amount of points,” said boss Thomas Frank.

“We know what to expect in this league. We didn’t win everything last year but we won a lot more. I’m sure things will turn around.”