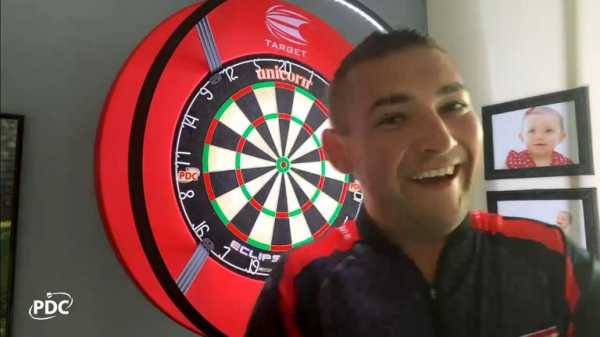 “For me it’s been a whirlwind two years,” Aspinall told Sky Sports. “I have probably gone from playing once a month in big tournaments to literally playing three or four times per week and being away from home quite a lot.

“It has definitely been a change for myself and the family but with the lockdown, I’ve managed to reflect on the last 18 months. It has been the first time I have managed to sit down and look at my life and realise how far I’ve come over the last couple of years.

“It’s been nice to have some time away from the darts but sport is getting back on our screens now so I am hopeful that the World Matchplay will go ahead. The hunger is greater than it’s ever been and I just cannot wait to get back on the stage.”

It would be remiss to suggest that the prolonged lay-off has been positive for any player, although Aspinall’s frustrations have been compounded following his sparkling start to 2020.

Fresh from reaching a second straight World Championship semi-final, the 28-year-old also featured in the last four on his Masters debut and won two of the year’s opening eight Players Championship events.

‘The Asp’ occupied a top four spot prior to lockdown and admitted that he’s relished his chance to compete in the sport’s biggest roadshow.

“The atmosphere, the crowds, competing with the best players in the world, week in week out. It was brilliant and when that got taken away from me, it was really hard.

“I was playing really well. I’m a player that feeds off adrenaline and I’ve had nothing of the sort at the moment, so I’m finding it hard, but when it kicks off hopefully I can carry on from where I left off.”

“I never expected to be where I am,” he continued. “I always knew I had the game, I thought I was good enough to be a top 32, top 16 player.

“Did I think I would be pushing for a top-four place and a Premier League player? Absolutely not. I’m taking every opportunity that I get and I think the key for myself was signing with my manager Martin.

“He’s been a massive influence on me. He enabled me to quit my job and go full-time. He gave me a lot of support financially to take that worry away from me, but I’m repaying him now with a couple of majors.”

The reigning US Master relinquished his PDC Tour Card in 2016 and having been on the periphery of the world’s top 64 less than 18 months ago, he could be forgiven for settling for his current status.

Aspinall’s humility is commendable, but that is coupled with a burning desire to maximise his potential and emulate Michael van Gerwen in becoming both world champion and world number one.

He has the upper hand from his three meetings with the Dutchman this year and he believes he has the potential to usurp ‘The Green Machine’ at the sport’s top table in the future.

“Anything I do, whether it’s being a dad, a husband or a dart player – I want to be the best that I can possibly be,” he said.

“I’m still learning how to play on the biggest stages and over the longer formats, but I do believe that one day I can become world number one and hopefully world champion as well.” 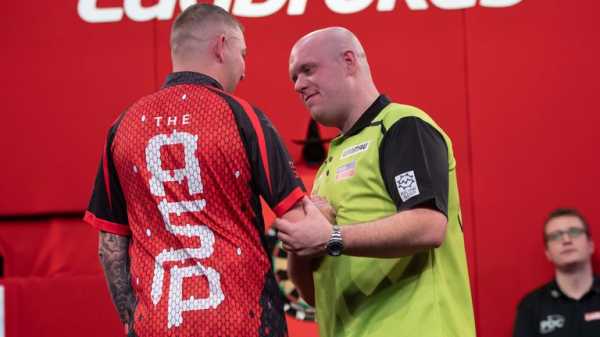 Despite Aspinall’s unequivocal designs on rising further up the ranks, his immediate focus is centred around the PDC Home Tour, which concludes on Friday.

‘The Asp’ is through to the last eight of the innovative event and will feature in Thursday’s second semi-final group, courtesy of a clean sweep in Monday’s Play-Offs.

Having eased through the first phase of the competition in April, the world No 7 defeated Jamie Hughes and the Iberian duo of Jose De Sousa and Jesus Noguera to maintain his 100 per cent record.

Rob Cross and Gary Anderson are the only other top 10 representatives in the semi-finals after Peter Wright and Glen Durrant were unceremoniously dumped out on the opening two nights of the Play-Offs.

By his own admission, Aspinall has been significantly adrift of his blistering best and he attributes the unpredictable nature of the tournament to the unfamiliarity felt by the game’s leading lights.

“It’s so different. Even when you are practicing at home with someone you get into a rhythm, but you cannot do that with the Home Tour because you’re waiting for them to throw and then see what you have left.

“The players like myself, Glen [Durrant] and Peter [Wright] – we are used to playing in front of big crowds with adrenaline. It’s so different for us whereas no disrespect to the other players, most of their games are on the Pro Tour in a quiet environment, maybe that’s a factor?”

Aspinall’s desire is an integral component of his darting make-up – the 28-year-old is renowned for raising his game against the world’s best.

There is a certain prestige ascribed to becoming the inaugural winner of any title and Aspinall was genuinely surprised to learn he was tournament favourite prior to Gary Anderson’s star-studded display in Group Three. 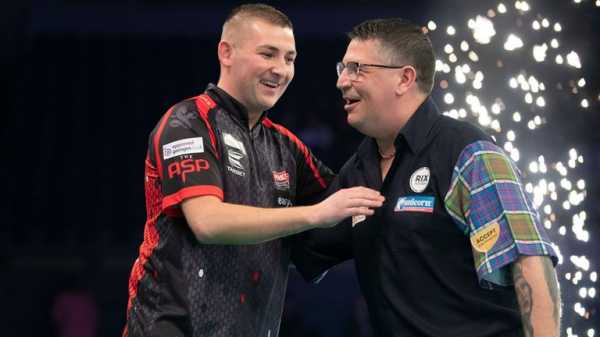 Some players have revelled in the unprecedented circumstances of the Home Tour, yet the fact that Aspinall remains in contention despite his below-par displays encapsulates his battling qualities.

“The way I’m built and the hunger, anything I play in – whether it’s the Home Tour or the World Championship – I want to play the best I possibly can,” added the Stockport native.

“I want to win. I didn’t know I was the favourite but I’ll take that as a positive going into the rest of the tournament.”

Aspinall will be the first to acknowledge that he’ll need to produce his A-game over the coming days to add the Home Tour title to his growing haul, but when competitive darts makes its imminent return, he could be an even more dangerous proposition.