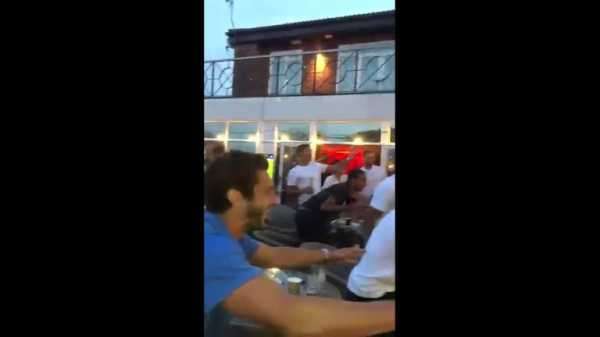 0:40 After hearing the full-time whistle at Stamford Bridge, Liverpool’s players celebrated together as they claimed the clubs first ever Premier League title.

“It was an unbelievable feeling, when Chelsea scored the second one, it was like ‘wow’, it was a party. We tried to keep the distance but it doesn’t work sometimes but we did our best.”

Just as Liverpool’s Champions League final victory over Tottenham last June allowed them to put to bed the pain of losing to Real Madrid in the previous year’s showpiece, this season’s Premier League win is all the sweeter for how agonisingly close they came in 2018/19.

The Egyptian reflected with Carragher on how last season’s low moments of realisation Liverpool would miss out to City – and by just one point in the end – have been replaced by significant wins which had the players believing this – finally – would be their year.

“I do remember last year the game against Manchester United away, when we drew [in February], and I went to the dressing room, I put a towel over my head and I started to cry because that’s the moment I felt like we had lost the Premier League,” Salah said

“I think after that game, Man City stepped into first place then I was like ‘it’s going to be tough now because there are only a few games left’ and you have to wait for them to draw games or something.

“I think the first time we felt [a big moment towards winning the league] was when we beat Man City here [at Anfield].

“We said ‘OK, now we’ll go for it’. Then I think a few games as well, like Leicester City here when we won in the last minute, we knew mentally ‘OK, this is our season now’.

“Last season, we didn’t have that luck. This season we had it – because you still need the luck anyway – so that moment felt like it was our season so let’s go for it.”