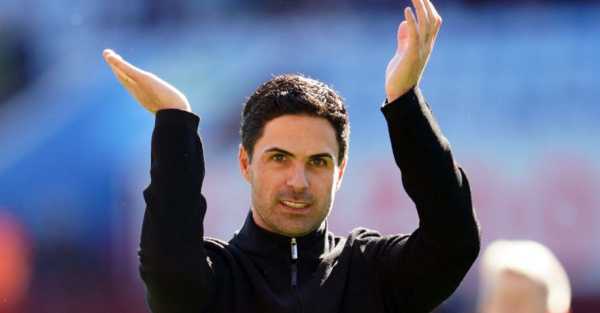 Mikel Arteta is hoping his new three-year deal as Arsenal manager can provide a “final push” to his players as they aim for Champions League qualification.

The 40-year-old took over at the Emirates Stadium in December 2019 following the dismissal of Unai Emery and has signed a new contract to tie him to the club until 2025.

He is close to taking the Gunners back into the Champions League for the first time in five years, with the side currently fourth in the Premier League as the season enters its final stages.

They sit two points clear of local rivals Tottenham with four games remaining, including a trip to Spurs next Thursday, and Arteta believes the timing of his new deal could help see the club over the line.

“The club was really eager to do it as quickly as we could,” he said.

“Obviously they showed a lot of faith and belief in what we are doing, with the coaching staff, what’s the direction of the team.

“They thought the best moment was to do it right now, to give a final push to the team, to give some clarity about what we have to do in the summer, in the future.

“It’s a way of saying ‘listen, from both ways we believe in what we are doing and we want to commit to this project together.’ This is the place I want to be so it was a really simple decision for me.”

Asked about his ambitions, Arteta added: “To take the club to the next level and to compete really with the top teams. In order to do that, we have to be playing in the Champions League.

“We have to be able to evolve the team, improve our players, improve all departments, generate even more connection with our fans, improve the atmosphere at the Emirates, be able to recruit top, top talent and the best people for this club to drive this project to that level.”

The Swede was appointed last summer and could end his first campaign in charge by winning the Women’s Super League title, with Arsenal just a point behind leaders Chelsea heading into the final weekend of the season.

Eidevall has signed a two-year contract and believes he and Arteta approach football in a similar fashion.

“Obviously, it’s a great thing,” he said of his new deal.

“It allows me to continue to work for a club that I love so much and be around people that I really, really like, and to be able to achieve things together, so I’m really looking forward to that.

“I can also see similarities in the way that we approach the game, and how detailed we are in trying to prepare the team for every game, so I can absolutely see those similarities.”