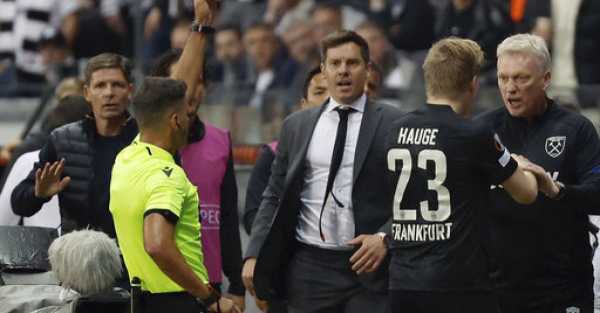 West Ham United manager David Moyes apologised after he was sent off for kicking a ball at a ball boy during his side’s Europa League semi-final defeat by Eintracht Frankfurt on Thursday.

With 12 minutes remaining, Moyes angrily kicked the ball at a ball boy who he thought was wasting time as 10-man West Ham lost 1-0 in the second leg in Germany and went out 3-1 on aggregate.

“I have to apologise for kicking the ball, but the ball boy left it short,” Moyes told reporters. “I kicked the ball back at the ball boy, so I apologised for that. But he threw it very softly at me.”

Moyes also criticised the Eintracht coaching staff for urging the referee to send off Aaron Cresswell, who was initially shown a yellow card in the 19th minute for a challenge on Jens Petter Hauge but later dismissed following a VAR check.

“I thought it wasn’t great officiating tonight, but I think Aaron has given the referee a decision to make,” Moyes added.

“I was more disappointed with the bench of Eintracht Frankfurt. You don’t react in that way. Maybe that’s what we need to do. We do it by Queensbury rules. And it comes back to haunt you.”