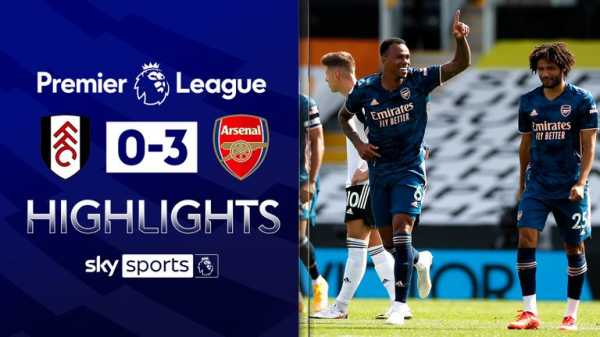 2:58 FREE TO WATCH: Highlights from Arsenal’s win over Fulham in the Premier League

But where did he begin?

“It was really important for me to figure out right away who the leaders were, who follows and who leads, how they acted and how much influence they had on other people.”

Aubameyang was quickly identified as one such leader. The star striker had been named as Arsenal’s new captain in the month prior to Arteta’s arrival, but the ongoing debate over his future thrust the new coach into the middle of a delicate contract negotiation.

Arteta had been on the other side of it as a player. He knew how to communicate his ideas out on the pitch. But this, he readily admits, was a new challenge. A new world, even.

“When you are convinced that they want to keep somebody,” he says, “it adds some pressure to the situation. But I just tried to get myself prepared and be very analytical about what I was trying to get out of the situation.

“What is the real aim here and how can I transmit my thoughts in the most natural and transparent way at the other end to get my message across?

“Then he can make the decision based on true facts.” 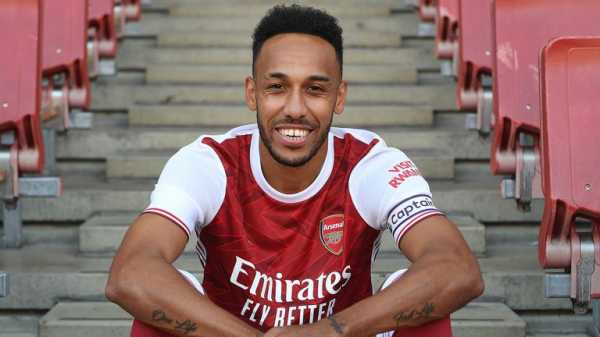 0:55 Barcelona and Inter made offers to sign Pierre-Emerick Aubameyang this summer

It took many months to convince Aubameyang to agree to a contract extension, but this open and honest approach resonated with the squad right from the outset.

“I had a group of players who jumped on board from the first day, trying to give their best to help us.”

Training was fun again and supporters shared that enthusiasm.

“The fans played a big part in what I was doing. From when I joined, straightaway, they changed the energy at the stadium. Everything became different. That was a big plus.”

Arsenal finally had some momentum but, just like that, it was gone. Arteta’s own positive test for coronavirus sparking the shutdown that would bring the season to an abrupt halt in March. Even when football resumed in June, it was without supporters inside the stadium.

The pandemic brought with it many challenges, far bigger concerns than Arsenal’s rebuild. “The situation put everybody under pressure,” acknowledges Arteta.

But it brought an opportunity too, the time that Arteta needed to focus on instituting the change of culture that was required. What he calls “the small adjustments to make quick improvements” that he believes will lead to big differences for Arsenal’s future.

“I think we used that time pretty well,” he says. “There were a lot of things we did not have time to put in place before that with the coaching staff. It gave us time to do that.

“Then I had time with the players to get to know them much better and create the next plan for the next phase after the lockdown. It worked out pretty well.”

There were plenty of tweaks. Unai Emery’s outdoor gym had already ceased to be useful. Arteta switched the focus to yoga classes during lockdown. But beyond the cosmetic and the quirky, the key point was that bad habits would no longer be indulged.

Emery had complained after his exit of a lack of commitment. Time-keeping had been a problem, conference calls seen as optional. Arteta’s high standards rubbed off on others.

In a wide-ranging conversation, the subject of Romario comes up, a hero at Barcelona, the club at which Arteta spent his formative years. The legendary Brazilian striker was infamous for his ill-discipline, preferring parties to training, but invariably delivered on the pitch.

How would Arteta have coped with such a talent?

“I think if you are lucky enough to have one of those players like Romario in your team and he scores a hat-trick every weekend then you probably have to throw all your values away and allow them to do it and make an exception. But we do not have that problem.

“I think it is more about respect. We have to find a way to live together in a proper way. It does not have to be about disciplinary things, I think it comes just from being a person who respects the person next to him, his roles and responsibilities, and the work they put in.” 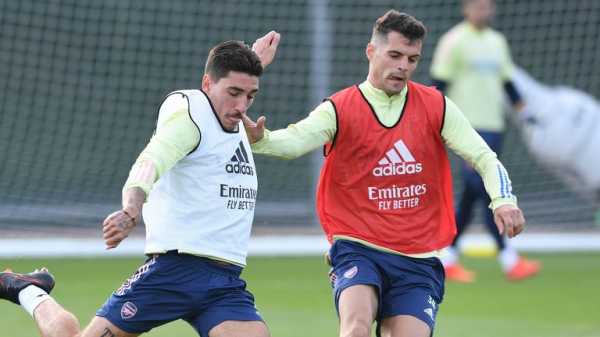 The clarity of the message has been key. Indeed, it has been a recurring theme when Arsenal players have been asked about Arteta. Granit Xhaka, rejuvenated in midfield, points out the “clear game plan” and the fact that everybody knows what their job is now.

Hector Bellerin talks of a “big change”, the professionalism of his manager, and the “very clear ideas” that have underpinned the team’s work over the past nine months.

“It is about helping them,” Arteta explains. “Helping them to become better players and win football matches. When I was a player, the thing that I found most difficult to manage was when it was the day before a game and I was not clear what I was going to find.

“From my side, I have to try to provide them with the pictures of what is going to happen, how we are going to resolve it to provide some security, because I believe that the more secure they are when they run onto the field then the better they are going to perform.”

Arsenal’s 3-4-3 formation, adopted soon after the summer restart, has helped to provide that security. The opening-day win over Fulham was, statistically, their best defensive performance in five years, but Arteta has found a way to be threatening too.

“I don’t get too concerned about the formation,” says Arteta. “It is about where the players we have can adapt better and perform better, and how we can get the balance right better.

“We can attack and defend in different systems using the same personnel, but some days the players that we use make that system different. We try to exploit that by putting players in situations where they are comfortable and can perform at their best.

“Being able to play different formations gives us more adaptability so that we can cope with the more difficult times of the season when maybe we do not have the players to play quite the same way. We also want to be more unpredictable for opponents.”

Emery’s appointment was seen as the necessary corrective after 22 years of Arsene Wenger – a tactician who would adapt to the opposition rather than play the Arsenal way regardless.

But it is Arteta, a man whose instincts in terms of ball retention chime more with Wenger, who has succeeded where Arsenal had been failing in finding ways to beat the very best.

He has already presided over Arsenal’s first win over Chelsea away from the Emirates in three years and their first win over Manchester City anywhere in that time. Manchester United have been beaten once and Liverpool twice – ending a 10-match winless sequence.

Arteta, it seems, is a difficult man to pin down. He talks of wanting the ball but has delivered some of Arsenal’s best results of recent times without it. He has brought through young talent from the academy but turned to the transfer market to sign 32-year-old Willian.

“There has to be a good mix,” he explains.

“We are here to win at the end of the day. That is the thing that I like most about any sport. You get a much better feeling, much more belief in what you are doing, when you win.

“This is the kind of support that these young players, these incredible talents that we have, need around them to become better players. We are trying to get that balance.

“I am very happy with what we have at the moment. I think people are enjoying it, I see players who are happy coming to the training ground with the right motivation and the right level of responsibility. They get looked after but they get challenged at the same time.” 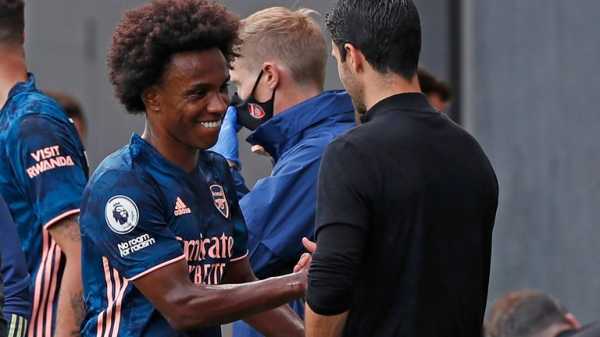 The break between seasons was a short one but Arteta and Arsenal have still taken steps to embark on the next phase for this new team. The management structure has been streamlined. Arteta already has a close bond with Per Mertesacker, the club’s academy boss, while he is developing a strong connection with technical director Edu too.

Steve Round and Albert Stuivenberg joined the coaching staff last season but Andreas Georgson is a new addition having impressed as a set-pieces coach at Brentford.

With Arsenal having conceded the highest percentage of set-piece goals in the Premier League last season, his knowledge is welcome. It is typical of Arteta’s vision – he has the humility required to be willing to surround himself with experts in their field.

“We analysed at the end of the season the key areas in which we could improve and how we could do that,” he says. “Obviously, I have to have the right people around me with the right expertise to provide the team with the solutions and improve in areas where we were not at the level to reach the places that we want to reach in the league.

“Sometimes it is not possible to see results in the short term but I am sure that we will evolve in the right way. I am really happy with the progress that we are making.

“We still have a big gap to make up before I can see the team where I want them to be but I think we are setting the right foundations in order to achieve it.”

Arsenal host West Ham at the weekend before travelling to Anfield to face champions Liverpool in their next away assignment in the league. Jurgen Klopp’s side are the benchmark now. That is where Arsenal want to be, the winning culture that Arteta wants to bring to the club.

His recent role as Pep Guardiola’s assistant at Manchester City means that he knows from first-hand experience, the changes required to turn a team into winners.

“From the first season to the second season, you could see the difference straight away,” he says of the transformation that brought City their back-to-back Premier League titles. “You could see some things that we did that cost us a lot of points.

“Once we did that, everything started to flow and the success came.”

A repeat at Arsenal feels some way off. But the journey has begun and the victories over English football’s most celebrated sides in recent months are a reminder of what is possible.

“On any day we can beat them, compete with them and win trophies,” says Arteta.

“But the belief has to be sustained through a 10-month period, which is a different task. In order to achieve that, there is a lot of detail and work and behaviours that have to be maintained for a long time by a lot of players and staff. This is where we are.

“How quickly can we reduce that gap and how efficient we can be in achieving that?

“That is the challenge now.”