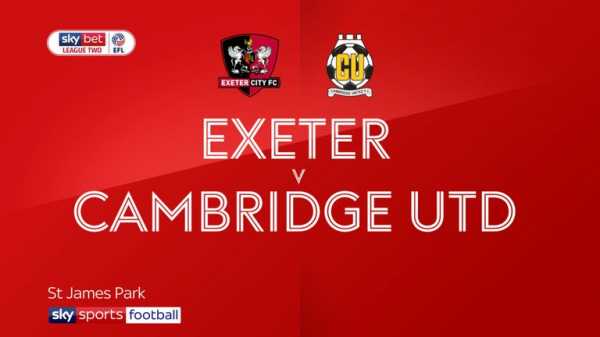 1:48 Highlights of the Sky Bet League Two match between Exeter and Cambridge

But Taylor recognised that there was a need for other qualities too.

“We tried to recruit a certain type in the summer,” he tells Sky Sports. “Maybe a bit more of a physical approach to give a more dynamic nature to our team. I felt we needed more legs, more pace and more physicality. It was a slightly different profile to our recruitment.

“We have had a core group at Exeter City for some time and that’s testament to Paul. We are a club that produces young players but those young players need experience around them to give them the opportunity to play. We are trying to get the right balance now.

“We would all love to play a beautiful passing game but anyone who has seen our home pitch in recent weeks would understand that we can’t do that all the time.

“I just felt that more physicality would allow us to do that.” 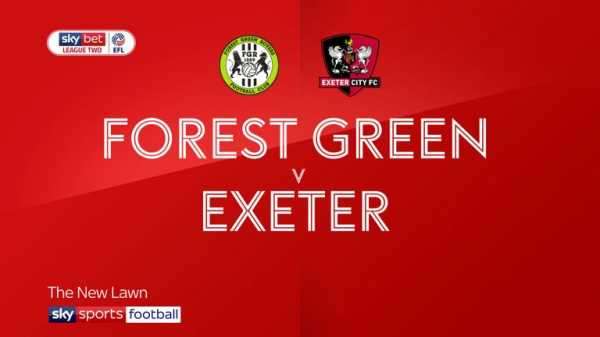 1:51 Highlights of the Sky Bet League Two match between Forest Green and Exeter

It served them well during a run of 10 games in 35 days. Even when points were dropped, such as in the 3-3 draw with Walsall, the result revealed something of their character. Exeter had been three behind in that game. The win away to promotion rivals Forest Green on New Year’s Day was achieved despite being a man down for the whole of the second half.

“The Walsall game showed how tight the margins are,” says Taylor. “If you are not quite at it then you get punished. To come back from that, the lads showed character.

“It is all down to the players really. Professional footballers have to make certain sacrifices over the festive period and my players certainly did that but there are a lot worse things to be doing than playing football. We want to play games. It is part of being a footballer and I have looked to use the squad the best that I can and not put anyone at risk.

“But the players have really stood up. It shows the strength in depth that we have in the squad. It is a hungry group and each player is pushing for a starting place in the team. When they have got the shirt, they are fighting tooth and nail to keep it. I am really pleased we have got that competitiveness. The players are showing they are up for the fight.” 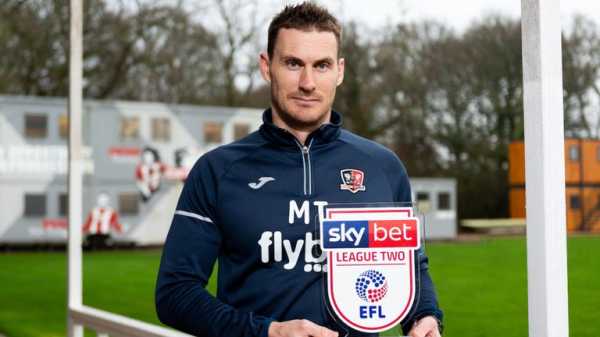 It is going to be a scrap all the way through to May – “We are one of a dozen teams that can still challenge,” says Taylor – but there is a renewed belief Exeter can see the job through. It is something of a thorny subject given the suggestion of a ceiling on the club’s ambitions was a frequent topic of debate during Tisdale’s long reign.

Even last season, the club only missed out on the play-offs on the final day of the season after competing well for much of the campaign. The new manager had to cope with the January sale of star striker Jayden Stockley too. This time around it is injury that has robbed Taylor of talented young wing-back Jack Sparkes for the remainder of the season.

While aware of the challenges, Taylor wants to maintain the push.

“We know we are limited at this level,” he admits. “There are some huge clubs in and around us who will all strengthen in this window. We are not quite in the same position to do that in terms of paying fees for top quality players.

“League Two is probably the right level for us but we still want to go one better. The key will be keeping the core group together and if I can bring in maybe one player to strengthen then I will do. But our squad is pretty stable and there is no pressure on us whatsoever.

“My target at the start of the season was to improve on last season and reach the play-offs. It is going to be difficult but the boys are an honest bunch and we have put ourselves in a good position. Now we have to do it for the last three-and-a-half months of the season too.”

Such has been the form, it is automatic promotion that is the realistic ambition now. For Taylor, it is vindication given that he rejected an approach from another club in September. That is testament to his commitment but also to his belief in this project.

“Exeter put a lot of faith in me when Paul left and they have supported me greatly so I want to repay that the best I can,” says Taylor. “I am in a privileged position here. It is a great club to be at and a stable club to be at. I am an ambitious young manager and I know exactly what I want to achieve with this group of players.”

Does that mean promotion?

“It would be a massive achievement but it is achievable.”

Particularly thanks to the tweaks that Taylor has made at Exeter City.