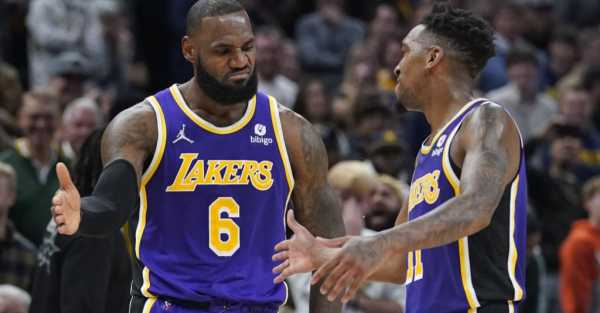 LeBron James starred on his return to action as the Los Angeles Lakers recorded a 124-116 overtime victory over the Indiana Pacers.

James, back after a one-game suspension, poured in 39 points and contributed six assists and five rebounds as the Lakers returned to winning ways.

Russell Westbrook got 20 points, with Malcolm Brogdon top-scoring for the Pacers with 28.

The Phoenix Suns extended their winning run to 14 games with a 120-115 victory over the Cleveland Cavaliers.

Devin Booker led the Suns with 35 points, while Chris Paul got 17 points and 12 assists.

The Houston Rockets ended their 15-game losing streak with a 118-113 win over the Chicago Bulls.

Patty Mills and Kevin Durant were in impressive form as the Brooklyn Nets powered to a convincing 123-104 win over the Boston Celtics.

The Curry brothers both shone as Stephen Curry’s Golden State Warriors beat the Philadelphia 76ers 116-96 despite a 24-point performance from Seth Curry.

Stephen Curry top-scored for the Warriors with 25 points and also contributed 10 assists.

Terry Rozier got 27 points as the Charlotte Hornets beat the Orlando Magic 106-99.

Anthony Edwards scored 33 points as the Minnesota Timberwolves beat the Miami Heat 113-101, while Giannis Antetokounmpo got the same total in the Milwaukee Bucks’ 114-93 win over the Detroit Pistons.

The Toronto Raptors were comfortable 126-113 winners against the Memphis Grizzlies, while Trae Young got 31 points and 11 assists as the Atlanta Hawks overcame the San Antonio Spurs 124-106.

The Sacramento Kings beat the Portland Trail Blazers 125-121, the Utah Jazz beat the Oklahoma City Thunder 110-104 and the New Orleans Pelicans were comprehensive 127-102 winners against the Washington Wizards.