It wasn’t quite the great escape of Parnell Park a week ago but Liam Blanchfield popped up with another crucial goal for Kilkenny to secure an important Leinster SHC win.

Resurgent Offaly had reduced a nine-point deficit to just three with six minutes remaining at Nowlan Park and threatened an upset.

But a Kilkenny point from the excellent John Donnelly was quickly followed by Blanchfield’s goal which all but sealed back-to-back wins in the new round robin format.

It was Blanchfield’s injury-time goal as a substitute that denied Dublin a shock win in Round 1 and he proved his worth again in front of 6,976. Luke Scanlon had a strong game for Brian Cody’s Cats also and contributed four points while TJ Reid was relatively quite but still scored 1-5.

Cody will demand more accuracy from his Allianz league champions next weekend though when they travel to Galway to face All-Ireland holders Galway.

Kilkenny drilled 21 wides in total including 12 in the second-half and might have been punished for the wasteful play by stronger opposition.

Richie Hogan was absent again due to injury while Walter Walsh was withdrawn from the line-up before throw in with what Cody described as a ‘leg muscle’ injury.

It was a new-look Kilkenny from the side that edged past Dublin with a third of the team changed.

Paul Murphy, Conor Fogarty, Scanlon, Lester Ryan and Blanchfield were all drafted in.

The first three of those were named in the official team-sheet though Ryan and Blanchfield were late replacements for James Maher and Walsh.

Scanlon seized his opportunity and was Kilkenny’s most influential attacker, closely followed by Donnelly. 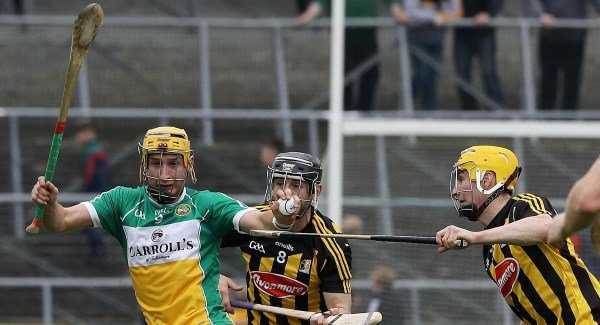 Blanchfield broke Dublin hearts a week earlier when he came on as a sub against Dublin and hit the 71st minute goal that decided that game.

He opened the scoring with a fine point in the seventh minute after a great catch and clearance by full-back Padraig Walsh who struggled against Dublin.

Blanchfield also set up scores for Scanlon and Reid who finished the opening half with 1-3.

Reid’s goal came in the 16th minute when he found space on the right of goals and accepted a Donnelly layoff before rifling to the net.

But the experienced attacker was errant on several occasions too and blasted three surprising wides in that opening half.

Kilkenny, who only beat Offaly by two points in the quarter-finals of the league, were 0-6 to 0-5 up when Reid netted.

The Cats pounced on their opportunity to build up some momentum and tagged on points through Scanlon and Reid, two each, to lead 1-10 to 0-7 at half-time. Offaly needed a big second-half but it was a flat encounter with little in the way of drama until the last 10 minutes or so.

The game looked to be petering towards an inevitable conclusion when Offaly suddenly came alive, breathing fresh life into the contest.

Joe Bergin pinched a goal after a brilliant reverse hand pass from Shane Dooley and an Oisin Kelly score then left just three in it, 1-16 to 1-13.

Kilkenny’s response was emphatic though and 1-3 without reply including another Blanchfield goal after a great run by Donnelly sealed it.