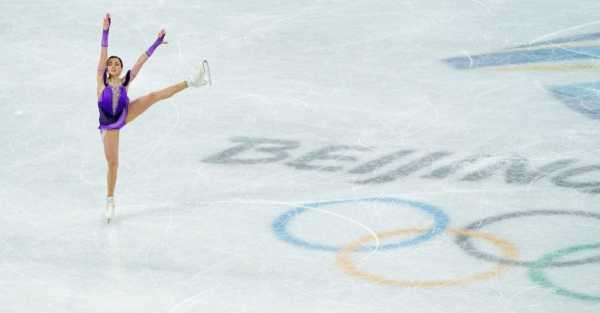 Kamila Valieva will have an asterisk applied to her name in the Olympic record books if she converts her lead after the short program into victory in the women’s figure skating competition in Beijing on Thursday.

The 15-year-old, who has been allowed to continue to compete in Beijing despite a positive drugs test, scored 82.16, her lowest of the season, on Tuesday night, but it was still enough for top position ahead of her Russian compatriot Anna Shcherbakova.

Valieva faces the prospect of being thrown out of the Games and having her results – including her gold in the team event last week – expunged from the records if her test for the banned heart medication trimetazidine is upheld.

The International Olympic Committee has already confirmed that no medals will be awarded pending the outcome if Valieva finishes in the top three, and its spokesman Mark Adams confirmed: “There will be an asterisk about the results on Friday because they will be preliminary.

“This case has not yet concluded and the CAS (Court of Arbitration for Sport) have made that very clear. In fact as far as I know, the B sample hasn’t even been opened, so I think drawing conclusions like this at this stage is really inappropriate.”

A number of athletes and former athletes, including direct rivals of Valieva, have questioned her right to remain in the competition or the perceived unfairness of allowing her compete in spite of her positive sample.

Particular attention has turned to the third-ranked skater after the short program, Japan’s Kaori Sakamoto, who also won bronze in the team event, but who faces the prospect of going home from Beijing without a confirmed medal.

“My heart goes out to the athletes but we all have to follow the rules,” added Adams. “I respect the opinions of all those great skaters but we have an absolute duty to follow the letter of the law, and due process is very, very important.”

Valieva’s positive test was revealed last Tuesday, one day after the conclusion of the team event. Her automatic provisional suspension was lifted by the Russian Anti-Doping Agency, whose decision was effectively upheld by CAS despite an appeal led by the International Testing Agency.