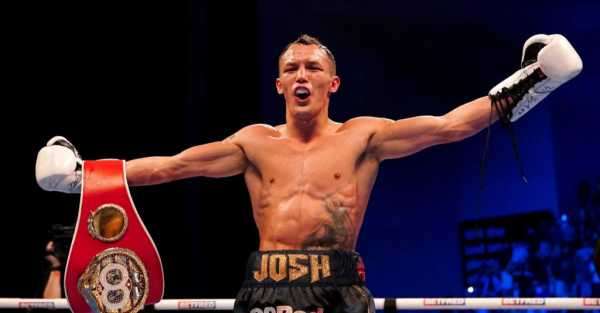 Warrington became a two-time world champion in thrilling fashion in his home city of Leeds on Saturday night, silencing his doubters with a stunning seventh-round stoppage of tough Spaniard Kiko Martinez.

‘The Leeds Warrior’, who regained the IBF belt he first won by defeating Lee Selby in 2018 and vacated 14 months ago, did not come through unscathed as he was later taken to hospital with a broken jaw.

O’Hagan told the PA news agency: “I think what this does, it gives us options now doesn’t it?

“Josh has always expressed an interest in going abroad to fight in Las Vegas, or maybe New York.

“But there again, we’ve got (WBA champion) Leigh Wood in the equation haven’t we? We’ve got (WBC champion) Mark Magsayo, the possibilities now are numerous.”

Warrington had slipped down the pecking order after his previous two fights in 2021, which ended in a shock first career defeat to Mauricio Lara and then a technical draw in a rematch against the Mexican.

But the 31-year-old answered his critics with a brutal demolition of Martinez at a sold-out and raucous First Direct Arena.

O’Hagan suggested Warrington has two career-defining fights left in him and believes he has earned the right to follow his heart when it comes to choosing his next move.

“With a fighter like Josh, who’s put his heart and soul into his career over the last 12 or 13 years, we’ve got to acknowledge what he wants,” O’Hagan said.

“I know that would be a unification (fight) in the States, so we can’t rule out (WBA super-featherweight champion Leo) Santa Cruz.

“If I was going to choose one I’d say let’s go take on Santa Cruz, then we’ll come back home for maybe his last one and unify against Leigh Wood.

“There will be some clamour for that, absolutely, but like I say, Josh has done everything that’s ever been asked of him.”

Warrington made a blistering start against Martinez, who had won the IBF crown when knocking out Sheffield’s Kid Galahad in November.

The Yorkshireman sent Martinez crashing to the canvas with a right hook flush to his chin in the opening round and also opened up a cut over the Spaniard’s left eye.

Martinez somehow survived as the onslaught continued in the second round and proved a worthy champion by edging back into the fight after Warrington eased off the gas in the following two rounds.

Warrington was caught by some heavy punches in rounds four and five, but responded in the sixth.

After trapping Martinez on the ropes in the seventh, another relentless Warrington barrage prompted the referee to step in and stop the contest.