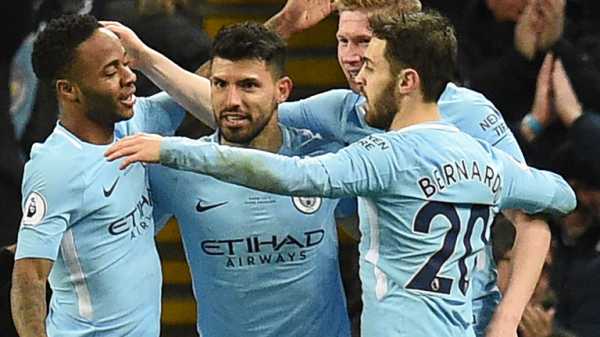 Manchester City are on course to wrap up the Premier League title in either March or April, and could even clinch it with victory over Manchester United.

City moved a step closer to the title over the weekend as they thrashed Leicester 5-1 on Saturday and United were beaten 1-0 at Newcastle on Sunday.

The results mean City are 16 points ahead of United with 11 games of the season left to play and Pep Guardiola’s side could now win the league with a win over their city rivals at the Etihad Stadium on April 7.

For that to happen, both City and United would need to win their next five matches, which would leave City needing just one more win to secure the Premier League title.

Should United drop points before the derby then City could even wrap up the title in late March when they face Brighton or Everton.

However, City might not get the chance to win it against United if they progress in the FA Cup.

They face Wigan in the fifth round of the competition on February 19 and the weekend of the quarter-finals is on March 17, which is when City are scheduled to play Brighton in the Premier League.

That game would then be postponed and City could be left needing one more win to secure the title if they beat United.

Whatever happens, it seems the title is heading to the Etihad, and City are looking to break a few records too, including Chelsea’s record points tally of 95 set in 2004/05 and last season’s record of 30 wins from 38 games.