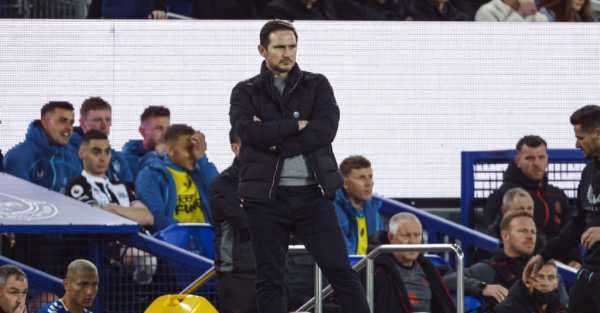 Everton manager Frank Lampard broke his hand celebrating a late 1-0 win over Newcastle which ignited their fight to avoid relegation, but he is prepared to sustain more damage if it means similar results.

Allan’s 83rd-minute sending-off looked to have ended any hopes of a victory before Alex Iwobi seized the chance with an angled drive nine minutes into the additional 14, which were tagged on mainly due to the VAR review of the red card and a protester who tied himself to a goalpost.

It was only Everton’s third Premier League win since September and it lifted them three points clear of 18th-placed Watford with two matches still in hand.

However, it was Lampard’s broken bone which was of more relevance on the night.

“I don’t know, I did it in the celebrations for the goal. I think I just connected with something somehow and I realised two minutes later my hand was shaking and going a bit achy – but I’ll take it for the three points,” said the Toffees boss.

Asked how many more broken bones he was prepared to take until the end of the season, he added: “They can take one every game if they want.

“This game is special and it hasn’t felt so special for us in the last few weeks.”

Lampard was naturally delighted with the win but furious with the red card decision.

He said: “It’s not a red card. Alan Shearer, Mr Newcastle himself, just said so and the frustrating thing for us is we had the most blatant one of the season against Man City (a penalty not given for handball).

“The referee gets it wrong, we get the apology, this time the referee sees it, he gives a yellow card. Did he seriously endanger the player by kicking him on the foot?

“We now lose Allan for three games. The system is not working because of decisions like tonight. VAR has gone wrong for us twice now.”

With 11 games left, Everton have ample opportunity to pull themselves clear.

“The whole evening was a big night for us. But nothing is done. We were all waiting for this, a night of togetherness and fight and spirit,” Lampard added.

“We got what we deserved, against the odds. It exploded in the technical area.

“A man down is difficult. Can we hang on? You take a point. Can we get one more chance or so?”

Newcastle boss Eddie Howe said his side paid the price for poor decisions in the final third and not taking advantage of Everton’s red card.

“Not a great second half from our perspective, that’s what’s cost us the game,” he said.

“We got into some good positions, but the normal rhythm wasn’t there.

”It (Allan’s sending-off) gives you a big advantage and we didn’t capitalise on that. We didn’t deliver the plan we should have done.”