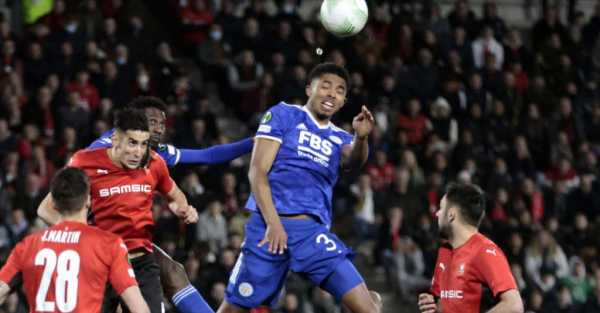 Defender Fofana marked his return after seven months out with a broken leg with the crucial goal in Rennes to send the Foxes into the last eight, despite a 2-1 defeat.

Flavien Tait won it for the hosts on Thursday but the Foxes hung on to sneak through 3-2 on aggregate.

The 21-year-old, who has recently recovered from Covid, had been out since August but was the hero in France.

“He’s an amazing player. That’s what top players do, they come in – he’s only been back in training a few weeks – and they want to go and head it,” Rodgers told BT Sport.

“That’s something we’ve really missed a lot of the season. Someone with that mentality – and that’s a top player’s mentality.

“He’s such a massive prospect and now we’ve just got to try and build his fitness up.

“Over the two legs, I think if you beat Rennes and qualify then you know there’s a lot that’s been really good.

“I think with the ball we were really, really poor. I thought our football in the game, especially in the first half, was nowhere near what I’d expect.

“But what we did show was a real character and games like that, especially with lots of players missing and lots of young players tasting this level for the first time, it’s character building for them.”

Bourigeaud bundled in from close range after just eight minutes but the hosts failed to build on their early momentum.

They were aggressive but Leicester held firm and managed to stabilise, despite losing Marc Albrighton to a groin injury, and Harvey Barnes wasted a fine opening after 16 minutes.

The Foxes gradually began to wrestle control and, after Dogan Alemdar saved Daniel Amartey’s header, Fofana glanced in the resulting corner six minutes into the second half.

Iheanacho’s header was ruled out for offside with 17 minutes left and Rennes went ahead on the night soon after when Tait found the bottom corner.

The hosts threw everything at the Foxes and Kasper Schmeichel’s brilliant save from Serhou Guirassy with five minutes left sent Leicester through.

Midfielder Bourigeaud told UEFA.com: “I don’t have any regrets because we played really well. We just lacked that little bit of luck. I’m frustrated and, of course, disappointed because we wanted to go through. But we can be proud of how we played.”