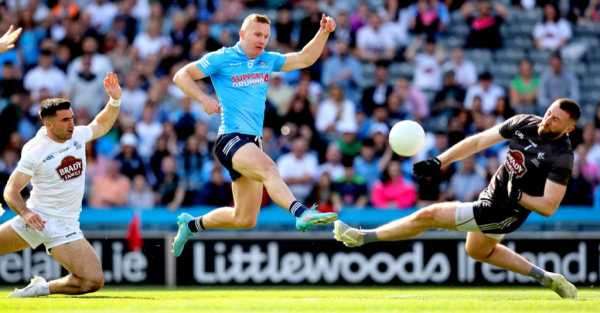 Dublin and Kerry have walked their way into the All-Ireland quarter-finals after both teams claimed provincial titles on Saturday.

Kerry retained their Munster Senior Football title with ease after a win over Limerick at Fitzgerald Stadium.

Killan Spillane, who started in place of injured David Clifford, kicked 1-3 for the Kingdom.

Meanwhile, in the Leinster Football Championship final, Dublin were back in flying form with a win over Kildare in Croke Park.

Two goals from Cormac Costello sent Dessie Farrell’s men on their way to a 12th title in a row.

Other goals for Dublin came from Con O’Callaghan, John Small and Ciaran Kilkenny.

The Dublin ladies footballers were also successful in their provincial exploits in Croke Park, beating All-Ireland champions Meath to be crowned Leinster champions.

The Royals were looking to add a Leinster football title to their National League and All-Ireland crowns recently.

However, Hannah Tyrell’s penalty helped give the Dubs a 1-7 to 1-5 victory over their rivals in the provincial decider.

Elsewhere, in Killarney, the Cork ladies football team were victorious in the Munster final.

In other GAA action on Saturday, the first round of the Tailteann Cup got underway.

There were wins for Leitrim and Cavan who beat Antrim and Down respectively.