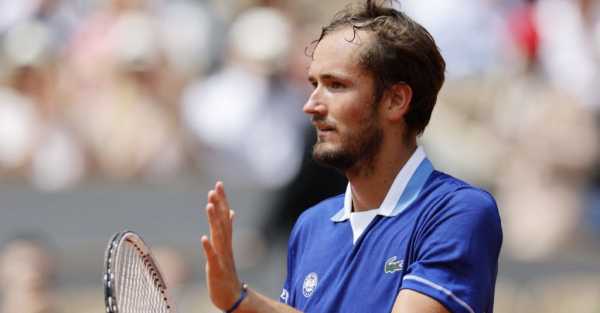 Daniil Medvedev has his sights set on returning to the world number one spot after his first reign at the top lasted just a fortnight.

The 26-year-old revealed he even Googled ‘shortest time as world number one’ after Novak Djokovic reclaimed his place at the summit earlier this year.

The controversial decision to strip Wimbledon of ranking points will skew the standings with Medvedev in with a chance of climbing back above Djokovic despite being one of the Russians banned from playing at SW19.

It is without doubt a strange situation but Medvedev insisted: “For sure I want to be there more than two weeks. I want to try to do it.

“We won’t know how this Wimbledon thing (will affect it), but I want to try to make the best results possible, starting from here.

“I remember Indian Wells I lost, I didn’t like my match against Gael (Monfils). ‘Well, OK, it’s tennis, I lost’. That’s when I knew I was going to lose the number spot. I was like, ‘well, just two weeks’.

“I went on the internet and looked just like this on Google, who were the shortest number one players in the world, and the first I saw was Pat Rafter being there for one week, and he’s an absolute legend, and Carlos Moya was somewhere there.

“I didn’t know these stats, and if somebody asked me how long were Rafter and Moya number one, I’d say, ‘I don’t know, six months, one year?’

“So it’s something nobody can take away from me. Not that many players could take it while they play tennis. It’s a great motivation to try to come back there.”

Medvedev raced into the third round of the French Open with a 6-2 6-4 6-2 victory over Serbia’s Miomir Kecmanovic in less than two hours.