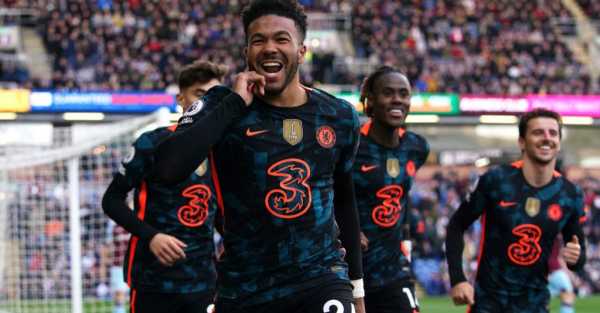 Chelsea stunned Burnley with three goals in the space of nine second-half minutes on their way to a 4-0 victory at Turf Moor.

Reece James, making his first start of 2022 after injury, got the first a couple of minutes into the second half and then had a hand in the next two – both finished by Kai Havertz – with Burnley imploding as they lost back-to-back home league games for the first time this season.

It got worse for the hosts with a little more than 20 minutes to go when a mistake from James Tarkowski left Christian Pulisic with the easiest of finishes from barely a yard out.

Playing only their second league fixture since the 2-0 win over Tottenham on January 23rd – during which time they have become world champions, advanced in the FA Cup and lost the Carabao Cup final – Chelsea strengthened their grip on third place with a seventh win in eight Premier League visits to Turf Moor.

But for 45 minutes, it was hardly a performance that was likely to help Roman Abramovich’s attempts to sell the club for a reported £3 billion (€3.6 billion).

Chelsea fans interrupted a minute’s applause held in solidarity with Ukraine by chanting the name of their Russian owner, then watched on as a club sold last year for £200 million enjoyed the better chances against their side.

Sean Dyche’s men came out snapping at the heels of the world and European champions, making a nuisance of themselves and forcing openings.

Chelsea passed up the first chance – Saul Niguez’s cross eluded Havertz but rolled across for James before Charlie Taylor slid in to make a crucial block.

Moments later, Connor Roberts set Aaron Lennon free, and he cut the ball back for Wout Weghorst, who saw his first-time shot cleared off the line by Thiago Silva.

Chelsea began to establish a stranglehold on possession, but Burnley still had the better of the chances as they tried to hit Thomas Tuchel’s side on the break.

With 29 minutes gone, Dwight McNeil scooped the ball over an open goal after Edouard Mendy failed to deliver with a looping ball into the box from Ashley Westwood.

The winger was holding his head again when he looked to have a free run at goal, only to hesitate and allow Trevor Chalobah to steal the ball away. Jay Rodriguez slid in to win it back but this time McNeil failed to pick out the unmarked Lennon with a cross.

Burnley could only rue those missed chances as Chelsea cut through them in the first 10 minutes of the second half.

The ball was worked out wide to James, who made light work of turning McNeil inside out before firing across goal and inside the far post.

It was 2-0 five minutes later. James helped Pulisic make space for a cross and Havertz all too easily peeled away from his marker to head home at the back post.

Three minutes after that, James sent in a low cross from the right and Havertz adjusted his feet to divert the ball over the line.

Dyche sent on Maxwel Cornet to try to turn the tide, but it did little good, and worse was to come in the 69th minute when Tarkowski stretched to meet Niguez’s cross but succeeded only in affording Pulisic the simplest of goals.

Defeat leaves Burnley still stuck in the bottom three before next week’s trip to Brentford, and with a sizable dent in the goal difference which had been one of their best assets against the teams around them as the injured Ben Mee was sorely missed in the back four.