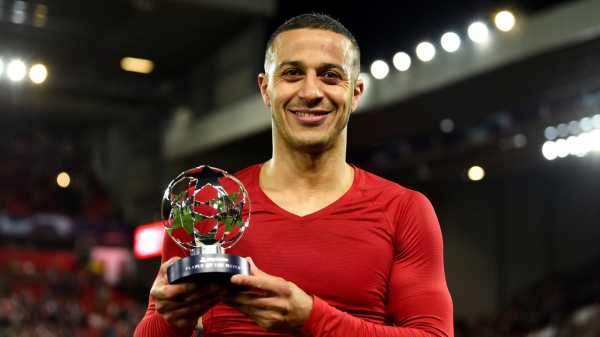 An artist at work: Thiago paints another masterpiece

Thiago needs to look at himself after this performance. His passing accuracy percentage dropped from 98 per cent against Everton to a miserly 96 per cent in this Champions League semi-final. Standards are slipping.

Putting the cheap sarcasm to the side for a moment, it’s an absolute joy to watch the Liverpool artist paint his strokes on the Anfield canvas. Ridiculous passing accuracy stats can sometimes overhype a player’s performance, especially five-yard sideways passing merchants. Thiago is a 50-yard pass merchant. Yes, he can play the short one but he takes on the dangerous pass time and time again. Some of his switches of play in this game were superb.

Make no mistake, Liverpool were superior throughout against Villarreal. But it did not feel like a coincidence that the opening goal of the game came after a trademark drop of the shoulder from their brilliant midfielder. Thiago eluded his marker, quickening the attack. The goal followed. 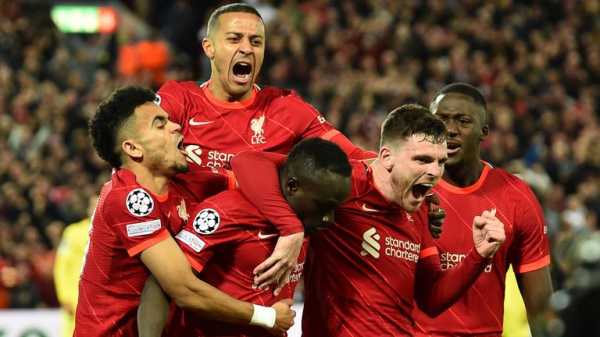 He had served notice late in the first half with his rasping shot from distance that arrowed its way towards the corner only to bounce away off the angle of post and bar. Thiago oozes quality and that quality was just too much for Villarreal on the night.

The temptation was to think that it was just a matter of time, that is how it felt. But patience is only rewarded if the team is continuing to probe for weaknesses. “It is not just about patience, it is about figuring out the gaps,” said Thiago afterwards. He finds them.
Lewis Jones

Don’t be too critical of Villarreal 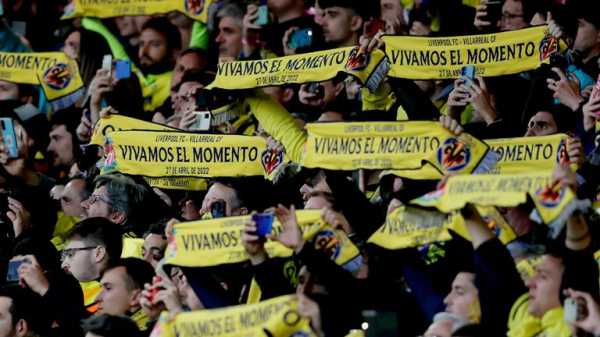 Villarreal have overachieved in reaching the semi-final of the Champions League and their victories over Juventus and Bayern Munich mean Unai Emery is in credit whatever happens over two legs against Liverpool. But this was a difficult evening for his team.

One attempt on goal – even that off target – was a fair reflection of how little Villarreal offered in attack at Anfield. The only team known to have had so few shots in a Champions League semi-final are Inter – famously defending a lead against Barcelona in 2010.

Yet, it feels churlish to criticise given the relative resources. Villarreal are the sort of team that the European Super League was designed to cut out of occasions such as this. Instead, this group, complete with former Premier League bit-part players, made it.

“Villarreal, I cannot respect more than I do,” said Jurgen Klopp, praising the organisation of Emery’s side, how they had made it so awkward for Liverpool to find the openings. In truth, it was not a meeting of equals. But perhaps these semi-finals are better for it.
Adam Bate 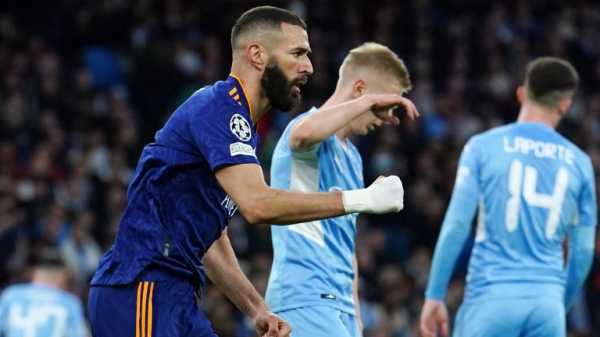 If you score four goals at home in a Champions League knockout tie, usually, you can start planning for the next round.

But Manchester City don’t do things by the book in this competition.

Pep Guardiola’s men led by two goals on three separate occasions in their bonkers clash with Real Madrid but only have a one-goal lead to take to Madrid. On the balance of play, Guardiola’s side should have one foot in the final.

Riyad Mahrez’s greedy decision at 2-0 to shoot when a pass across goal would have resulted in a tap-in for one of two team-mates sent Guardiola into a frenzy. You can tell his emotions are overly heightened when it comes to Manchester City and winning the Champions League.

“We must give everything we have in our soul,” he said in his programme notes for the game.

Guardiola’s job at City will only be truly complete with Champions League glory – and he knows it. There is a desperation to succeed.

Yes, Real haven’t managed to progress through a semi-final in this competition when losing the first-leg but no team shoot themselves in the foot like Manchester City do when the going gets tough in the Champions League.

There was the naivety against Monaco in 2017, the chaos against Liverpool in 2018 and the caution against Tottenham when Kevin De Bruyne was left on the bench in 2019. Against Lyon in 2020, Guardiola decided to play Rodri and Fernandinho and his side were eliminated. That pattern of results will be in the minds of the City players next week.

“The penalty was unlucky,” said Bernardo Silva on Aymeric Laporte’s handball that allowed Karim Benzema to cheekily score from the spot to bring Real Madrid back to 4-3.

Guardiola has to convince his players that a Champions League curse doesn’t exist. Roll on the second leg.
Lewis Jones 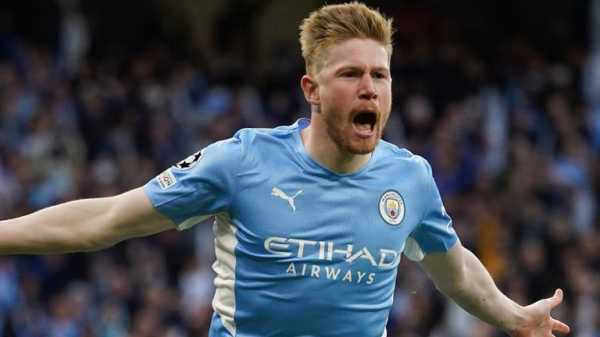 It took less than two minutes for Kevin De Bruyne to make his mark on this Champions League semi-final, darting between two defenders and expertly guiding Riyad Mahrez’s cross into the corner.

Headers are not his specialty, but De Bruyne can do it all.

The 30-year-old was the only member of City’s starting line-up to have played against the same opponent the last time the two sides met at the semi-final stage back in 2016.

This time, though, he looked determined to ensure the outcome was different.

City will feel they should be taking a bigger advantage over to Spain for next week’s second leg but they could not have asked for much more from their No. 17.

In the first half in particular, De Bruyne was practically unplayable, occupying the spaces where the absent Casemiro might usually have tried to shackle him and wreaking havoc in the final third.

He set up City’s second goal with a diagonal cross for Gabriel Jesus from City’s left flank and, had it not been for the profligacy of his team-mates, he would have ended the game with more than one assist to his name in addition to his goal.

Karim Benzema’s late penalty ensures the tie hangs in the balance at the halfway stage but recent evidence suggests City can count on De Bruyne to help them see it through.

Having scored in games against Manchester United, Atletico Madrid and Liverpool in the last two months alone, he is developing a habit of delivering when it matter most.

City will need him to step up again at the Bernabeu.
Nick Wright 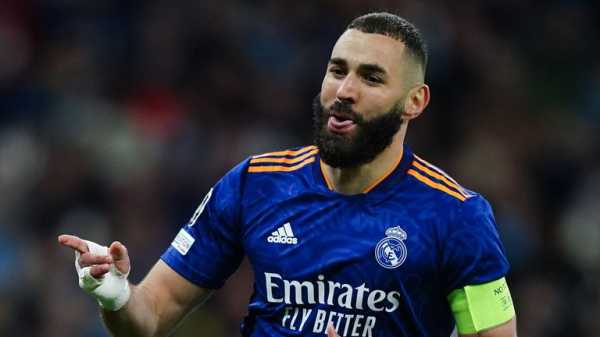 Image: Karim Benzema has scored 14 goals in the Champions League this season

Karim Benzema might be wondering why he’s now playing his best football at the age of 34.

The striker marked his 600th appearance for Real Madrid with yet another fine display to bring up his 13th and 14th Champions League goals of the season – and further strengthen his case for the Ballon d’Or.

His tally now sits at 41 in all competitions making him the fifth player to score more than 40 goals in a single season in the club’s history after Cristiano Ronaldo (seven times), Ferenc Puskás (twice), Alfredo Di Stéfano and Hugo Sánchez.

Benzema showed the form he’s in with how he took his first goal against Manchester City. He turned an average cross into a good one by guiding a first-time volley on his weaker left-foot in off a post. Then, with Madrid’s hopes of qualification fading, he produced a sublime Panenka penalty for his ninth Champions League knock-out goal this year.

Benzema kept his cool despite having missed two spot kicks last week and three this month, but his confidence had certainly not been knocked.

“I always have it in my head that if you don’t take a penalty, you will never miss a penalty,” he said afterwards. “That’s mental confidence and that’s all. I have a lot of confidence in myself… so I do it and it turns out well.”

His manager Carlo Ancelotti added: “I think he changed because the last two penalties were not good. He tried in training; I didn’t know how he would shoot. He chose this [Panenka] and he did really well, showing strong personality and character. It’s not easy in the semi-final of the Champions League to shoot a penalty like this.”

If Real Madrid are to produce a memorable comeback against Manchester City and then go on to win a 14th Champions League title – and Benzema’s fifth – then they will need him to keep being at his best.
David Richardson

Manchester City continue their quest for the Premier League title with a trip to Leeds on Saturday evening at 5.30pm, live on Sky Sports. City hold a one-point lead over Liverpool, who visit Newcastle on Saturday lunchtime.

Real Madrid can win the La Liga title on Saturday with a victory at home against Espanyol. Second-placed Barcelona missed the chance to cut into Real’s 15-point lead after losing 1-0 at the Nou Camp to Rayo Vallecano last weekend.