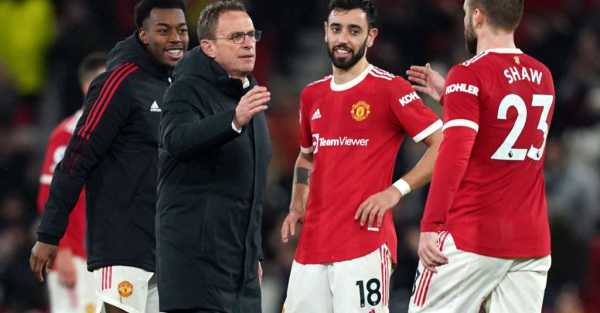 After a miserable start to the season, the German was brought in as interim successor to Ole Gunnar Solskjaer for the remainder of the season.

United have only lost once under Rangnick but the performances have not always been the most convincing, while reports have suggested dissatisfaction in the dressing room.

But Fernandes insists the mood within the camp is anything but problematic, pointing to the celebrations during Sunday’s 4-2 win at rivals Leeds as an example.

“I was doing an interview now and they asked me about Jadon (Sancho) doing my celebration,” he said. “I don’t think that is something that is going in different ways.

“I saw the goal of H (Harry Maguire) and I’m seeing Paul (Pogba) running behind him, sliding on his knees, happy for him. Everyone. I was slapping his head and saying that ‘finally you score with that big head’.

“So, I think honestly it’s just people trying to complain and making stories about this club because we know that when someone talk about this club or about some player of this club they go around the world with their voice.

It is a plan that Fernandes believes is working under Rangnick, whose side take on Atletico Madrid in the first leg of their Champions League last-16 tie on Wednesday.

“We have to follow what the manager and the staff think that is the best way for us and that’s the most important,” Fernandes said.

“Here in this club I never heard someone complain about the tactics and I hope no-one do that because it’s not respectful on the coach’s ideas because I think we have been doing so well since he arrived.

“We have more identity as a team, I think”.