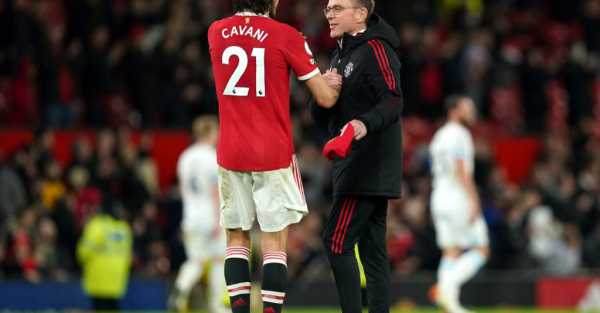 Atletico have produced the kind of Jekyll and Hyde displays that those watching United have become accustomed to, although Rangnick’s side made it back-to-back wins with Sunday’s thrilling 4-2 triumph at Leeds.

Another hostile atmosphere awaits the Red Devils on Wednesday, when United will be unable to draw on the experience of 35-year-old Uruguay forward Cavani for a fourth straight game.

“No, Edi will not be able to make the trip,” Rangnick said. “He didn’t train and he has not been training for the last couple of weeks, so he will not be part of the group.

“He has problems with his groin and, as long as he does not feel able to fully sprint, it does not make sense to train him and to force him back into training.

“I think he’s got enough experience to know by himself if he’s fully available again.”

Cavani’s continued absence is a blow as United prepare for their first Champions League last-16 tie since 2019, when the Uruguayan was part of the Paris St Germain side stunned in jaw-dropping fashion.

They bowed out in the quarter-finals to Barcelona after away goals saw them through in France, but with that rule abolished Rangnick is focused on just building a solid foundation in the Spanish capital.

“In the Champions League you need to perform on the highest possible level,” he said.

“Of course we had a game on Sunday, a very physical one. Atletico played away at Osasuna on Saturday, so there might be a slight advantage with regard to recovery on their side.

“We obviously made sure that the players could recover in the last two days and maybe we will have some fresh legs on the pitch. We will see.

“We need to play tactically on a high level, physically. Mentally we need to be prepared for a very emotional, if not even hostile, atmosphere in their stadium.

“Some of our players will not be received with a red carpet, obviously.

“This is what we are all aware of but I think we have enough experience in the team and on the other hand also enough talented young players. I think the mix of those two groups is perfect and we’re looking forward to that game.

“That’s why we are all here, why we love this ball game, in order to play in stadiums like (Wednesday) and then in three weeks when we have the second leg to play at Old Trafford.

Among the players in for an interesting reception on Wednesday night are David De Gea – an Atletico academy graduate who left in 2011 and nearly joined rivals Real Madrid four years later – and Cristiano Ronaldo.

No player has appeared more in the Champions League than the 37-year-old, who has five winners’ medals to his name and been the scourge of Atletico time and time again down the years.

Bruno Fernandes would not be surprised to see his Portuguese compatriot shine once again, but the playmaker says the stage is set for others to make an impact in the knockout phase.

“Cristiano has won this competition many times,” said Fernandes, who believes United have “more identity as a team” under Rangnick.

“But in the same way, we have Rapha (Raphael Varane), who has won the Champions League four times and is a player capable to do it.

“But it is always the first time for someone that wins, so sometimes it’s about someone (getting) more experience.

“Sometimes it’s about… someone experiences that for the first time because they are hungry to do something well, something good. They want to show it.

“When Cristiano won the first one, he probably was not the most influential player or had more experience in that competition (than others) and he won it anyway, and he helped the team win the Champions League.

“It’s all about everyone sticking together doing the same things, have the same focus and obviously having players that can decide games for us in any moment is always helpful.

“Being Cristiano or another one, the most important for us is winning the game and going through this stage.”