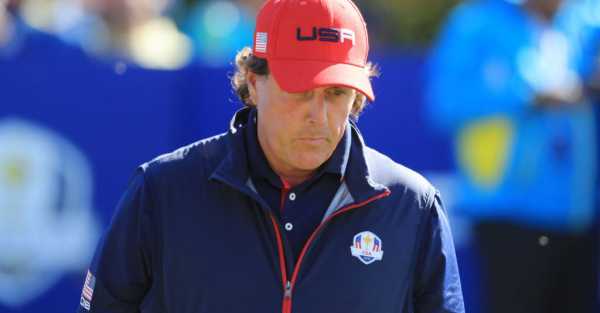 Phil Mickelson has apologised for his “reckless” comments about a proposed Saudi-backed breakaway league and said he will be taking a break from golf.

The six-time major champion has been one of the players most closely associated with the possible rival to the PGA Tour, which is being spearheaded by former world number one Greg Norman.

It was revealed last week, when an interview Mickelson conducted with biographer Alan Shipnuck last November was made public, that the American had concerns about Saudi Arabia’s human rights record but was prepared to overlook them in order to put pressure on the PGA Tour.

Support for the breakaway league has been decidedly thin on the ground, and Rory McIlroy criticised Mickelson at the weekend, calling his comments: “Naive, selfish, egotistical, ignorant”.

And in a statement on Tuesday, Mickelson said: “Although it doesn’t look this way now given my recent comments, my actions throughout this process have always been with the best interest of golf, my peers, sponsors, and fans.

“There is the problem of off-record comments being shared out of context and without my consent but the bigger issue is that I used words I sincerely regret that do not reflect my true feelings or intentions.

“It was reckless, I offended people, and I am deeply sorry for my choice of words. I’m beyond disappointed and will make every effort to self-reflect and learn from this.”

Mickelson, however, did stress that he felt the way sport is run needs to change.

“I have always known that criticism would come with exploring anything new. I still chose to put myself at the forefront of this to inspire change, taking the hits publicly to do the work behind the scenes.”

Mickelson, who revealed he has offered to end contracts with any sponsors that feel they can no longer back him, said he needed time away from the sport.

He said: “I have made a lot of mistakes in my life and many have been shared with the public. My intent was never to hurt anyone and I’m so sorry to the people I have negatively impacted.

“I have experienced many successful and rewarding moments that I will always cherish, but I have often failed myself and others too. The past 10 years I have felt the pressure and stress slowly affecting me at a deeper level.

“I know I have not been my best and desperately need some time away to prioritise the ones I love most and work on being the man I want to be.”

The 51-year-old did not but a time frame on his time away, but any break from golf could put his participation in April’s Masters at Augusta in doubt.