Walking to the stadium from the tube station on Saturday morning, there was a real buzz about this North London derby – more than any other women’s game I’ve been to at the Emirates. The outside of the ground was packed full of people two hours before kick-off, with the usual mix of genders and ages.

Later on, a band played outside as more fans poured into the Emirates and the usual chants more often seen in the men’s derby were sung throughout. This had the big match feel that it rightly deserves. 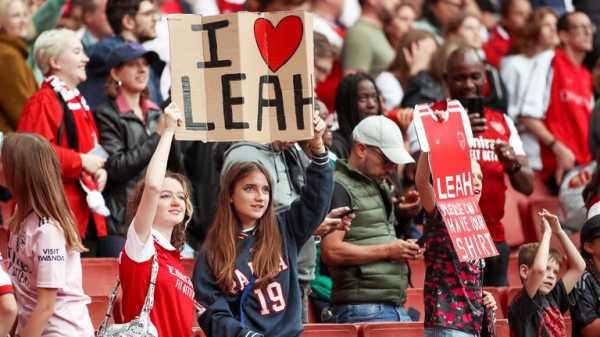 Image: The inspiration of women's football is continuing after the Women's Euros

Saturday’s record-breaking derby could not have come at a better time either. The opening WSL weekend was postponed after the death of Queen Elizabeth II, which meant a number of games set to be played at bigger stadiums – including Spurs’ match against Manchester United at the Tottenham Hotspur Stadium – were unable to take place.

Some were concerned that missing out on those opportunities to play at grounds with bigger capacities would stall some of the progress made during the summer.

But with 47,367 fans inside the Emirates helping to smash the WSL record, it proves that women’s football can draw large crowds given the right exposure and platforms.

“The game is the best advertisement there can be for people coming,” Arsenal manager Jonas Eidevall said after the game. “That’s what it’s about, for people to come here and feel proud of the team, of the players and wanting to come here to support. We hope many of them come back, bring a friend and then it’s a sell-out.

“It’s not only the work of the Euros, which was such a big success. The club are investing a lot of time, commitment and energy into that. It’s important that you don’t leave things to chance and you’re trying to build the game, increase the revenue and increase the sporting success.” 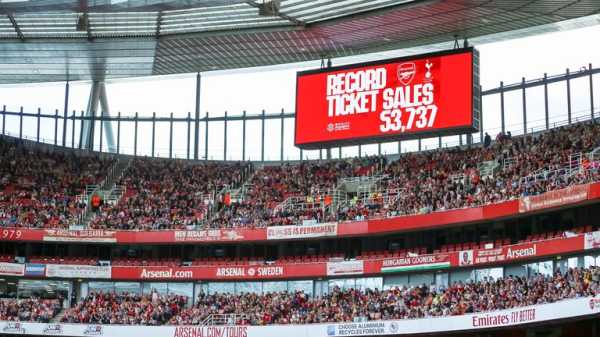 Image: Arsenal sold over 50,000 tickets for the game with 47,367 turning up for the Emirates Stadium clash

Arsenal have long been champions of women’s football and remain one of the most successful clubs in England, but Saturday’s game was the clearest indication yet of the impact Euro 2022 is having on the domestic game.

Last weekend, we saw 3,006 fans at Prenton Park for Liverpool’s win against Chelsea – the highest ever attendance for a women’s match at the ground. Now, the overall attendance record for the league has been smashed, soundly beating the previous record of 38,262 when Arsenal and Spurs played at the Tottenham Hotspur Stadium in November 2019.

Expect more and more headlines like this. Women’s football is growing at an exponential rate, fuelled in part by this summer’s success, but also the good work that is being done at club level across the league.

Fans are engaging, putting their bums on seats – and sometimes standing up during a rousing chant – as the inspiration continues.
Charlotte Marsh

Attendance is not the only category in which Arsenal managed to break records.

The Gunners now have an unprecedented 10 straight wins in the Women’s Super League, while Jonas Eidevall’s side also have set a clean sheet record by beating their north London rivals. It’s now eight games without conceding a goal in the WSL. 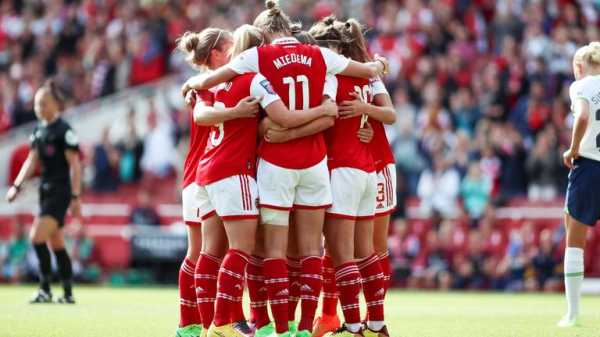 Image: Every player who started Arsenal's win over Tottenham was at the club last season

Keeping those records intact are phenomenal, considering the limited transfer window business Arsenal did this summer. Both Chelsea and Manchester City spent heavy on improving their teams, while the likes of Tottenham and Manchester United improved their depth.

After two 4-0 wins to start the season, Arsenal are flexing out their WSL title race muscles and continuity by not changing too much in terms of personnel.

On Saturday night, they will sit six points ahead of last year’s champions Chelsea – who take on fellow title rivals Manchester City, also without a point so far, in front of the Sky Sports cameras on Sunday.

No title race is won after two games but the way this Arsenal team are going, they will be difficult to take points off.

There will be bigger challenges than Tottenham and Brighton, but the more Arsenal remain consistent between now and Christmas – with no clashes against Chelsea or Manchester City currently in sight – then the more likely this gap to Chelsea and City could grow.
Sam Blitz

In reality, it was always going to be a tough ask for Tottenham to take anything from a North London derby at the Emirates against an Arsenal side who have not dropped a point in the WSL since February.

But as Rehanne Skinner said herself, it was disappointing that Spurs did not give a better account of themselves in front of a record-breaking crowd. It was a chance to show that a summer of shrewd recruitment has given them a better chance of competing with the WSL’s elite. 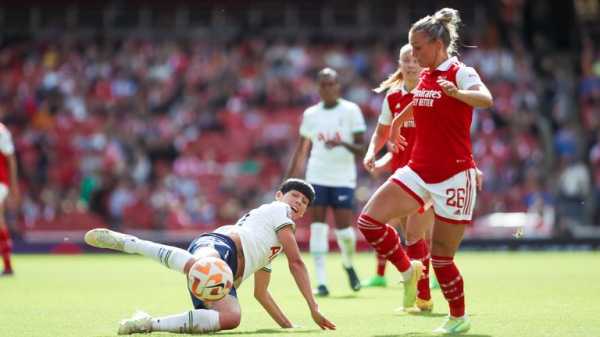 Image: Tottenham were overwhelmed by a dominant Arsenal at the Emirates

One of the biggest issues was that Arsenal simply did not give Tottenham enough time on the ball. Spurs had just 31.5 per cent of possession, and had only three shots with one on target. But even that is hard to recall – Manuela Zinsberger was largely a spectator along with the other 47,000 plus fans in the ground.

Although not using it as an excuse, Skinner also pointed to a much larger, noisier crowd making it hard for her team to communicate, saying: “It was difficult to hear and speak and to organise things. It’s something we absolutely have to get used to with those kinds of crowds.”

Some of this could well have contributed to a poor defensive error for Arsenal’s second goal, which allowed Vivianne Miedema through to score her first. Being better organised and stronger defensively from corners will also be worked on in training over the next few weeks.

While Arsenal were dominant throughout, Tottenham hamstrung themselves in these situations.

If Spurs want to compete again at the top end of the table, building on their impressive fifth-place finish from last season, they must learn to deal with these types of games in terms of how the opposition impose themselves – as the likes of Arsenal, Chelsea and others will be expected to do – and any additional hurdles that may come from growing crowds.

“The gulf in quality was because we didn’t apply ourselves properly, not because we’re not capable,” Skinner added – and she’s right. Once they figure out their strategy for dealing with these situations, there will be a marked improvement for Spurs in those ‘bigger’ games that will define the table come May.
Charlotte Marsh

It was the moment where Arsenal got the ball rolling and, while Beth Mead claimed the plaudits with a stunning finish after just five minutes, it was Kim Little who made the goal happen.

In the minute before Mead scored, Little had managed to track back expertly to stop a Tottenham counter attack. A few phases of play later, the Arsenal captain managed to wriggle away from two midfield opponents before playing the ball into Mead’s path for the goal. 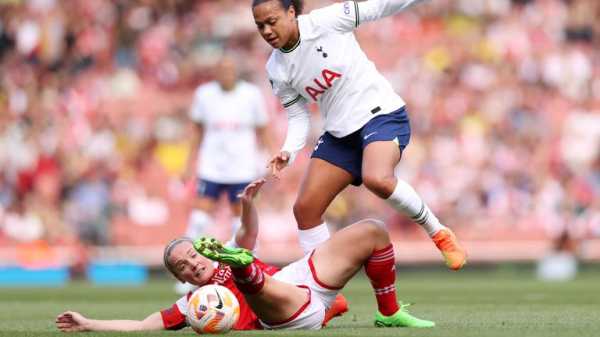 That minute or so, culminating in a top-class assist, sums up the Scot in a nutshell. While she will be judged on her attacking output, it’s the defensive aspect of her game that rubber-stamps her as a complete all-round midfielder and the heartbeat of this Arsenal team.

That tackle before Mead’s goal was one of six tackles she made all game – only team-mate Katie McCabe managed more – in the middle and defensive thirds. That graft did not go unnoticed.

“Kim Little? I thought she was phenomenal in defence and how well she worked,” remarked Arsenal boss Eidevall after the game. “And let’s not forget Katie McCabe with her control, aggression and how important she is to the balance of our midfield.

“Kim and Katie McCabe were phenomenal today with the way they made the defence work.”
Sam Blitz 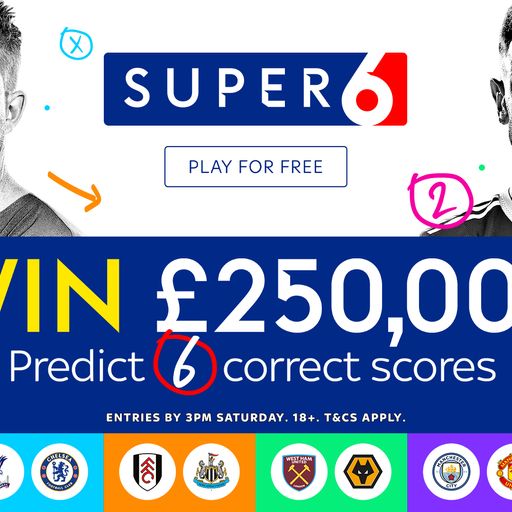