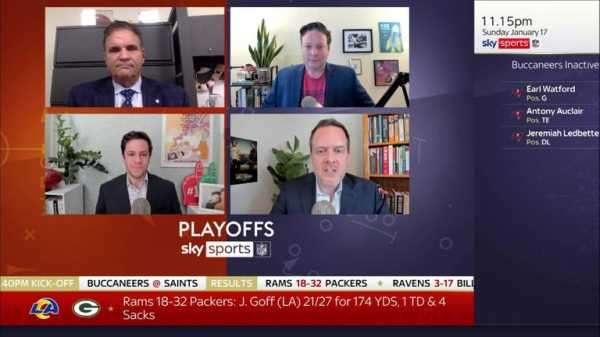 3:54 Kansas City’s head coach Andy Reid was hailed for leading the Chiefs to a hard-fought win over the Cleveland Browns

He has left little to fault: X’s and O’s mastery has been matched with strong player relationships to create a blend seen in the most iconic coaches throughout history, while 11 division titles in 22 years along with more total wins than John Madden and Vince Lombardi combined and now a trophy named after the latter to parade, he has earned his place among the greats.

Ring or not, Reid’s reputation as one of the most innovative and daring offensive minds to grace the NFL has been cemented for some time. The masked man makes football so damn fun.

Staring at fourth-and-one from his own 48 and leading 22-17 with 1.14 remaining behind back-up quarterback Chad Henne, the most nonchalant person inside Arrowhead had grown bored of the drama against the Cleveland Browns in last Sunday’s Divisional Round matchup.

In a ‘screw it, I’ll beat you now’ moment from Reid, Henne lined up in shotgun before taking the snap and firing right to Tyreek Hill for a game-winning first down.

Cue Chiefs hysteria and an awe-struck Tony Romo, whose mystic powers had been fooled by a play-call that typified Reid and everything he has become. 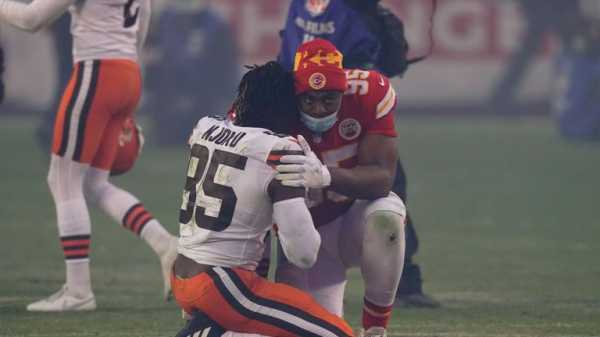 2:11 Kansas City, who spent most of the second half without star quarterback Patrick Mahomes, held on to beat Cleveland as they booked their spot in the AFC Championship Game

From the double reverses, pre-snap motion and end-arounds with the likes of Hill and Mecole Hardman to the use of tight end Travis Kelce as anything from a fullback to wildcat quarterback, the Chiefs under Reid have bamboozled teams with the art of misdirection for the past three years.

They even had Patrick Mahomes running in motion this season, their ‘Ferrari Right’ play in November’s win over the Carolina Panthers seeing the reigning Super Bowl MVP scurry left before taking the snap on the run, revolving to his right and throwing a dart to Demarcus Robinson for the touchdown.

Defenses just don’t prepare for that, why would they?

In Week Three’s victory over the Baltimore Ravens Mahomes delivered an underhand touchdown shovel pass to fullback Anthony Sherman on third-and-goal, as well as lofting an endzone strike to left tackle Eric Fisher of all people. Talk about gutsy.

Against the Patriots in Week Four Mahomes faked a hand-off to Clyde Edwards-Helaire on his right before flipping it to Hardman arriving in motion from the opposite direction to tee-up a six-yard touchdown run. Which way do you look as a defense?

And to prove the shovel pass against the Ravens was no fluke they did it again in the Week Eight win over the New York Jets, Mahomes rolling to his right to draw defenders with him before darting an underhand laser to Kelce for the score.

It doesn’t matter what game it is. Against the San Francisco 49ers’ No 2 ranked defense in the Super Bowl Mahomes, Robinson, Damien Williams and Sammy Watkins offered up a synchronised pre-snap spin on fourth-and-one from the five, opening a narrow but noticeable avenue for Williams to bundle over to the one-yard line.

Praise for Reid is also praise for the magnificent Eric Bieniemy, with his promotion to offensive coordinator in 2018 coinciding with the start of the magic they have worked with Mahomes, whose execution has been about as efficient and effective as the pair could have dreamed of.

You can just picture it. Reid, favourite cheeseburger in hand, and his partner in crime sketching new plays late into the night. Perhaps Mahomes lines up at receiver, maybe Hill takes the reverse and throws the touchdown pass to Kelce, could right tackle Mike Remmers make a catch? Nothing is off the table. 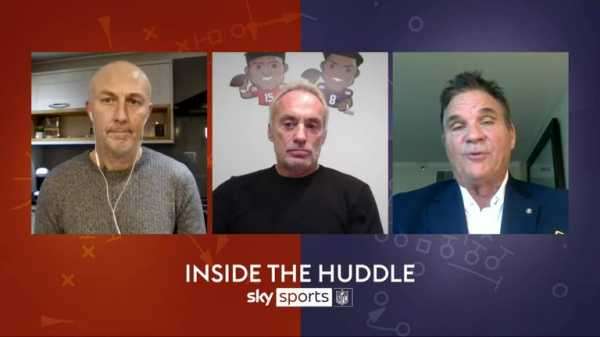 6:17 Neil Reynolds, Jeff Reinebold and Brian Baldinger take a closer look at the latest NFL head coaching cycle and debate why there continues to be a lack of opportunities for Black coaches

Reid altered his legacy in Miami last year, trading in his record as the winningest head coach without a Super Bowl title for a long-overdue lift of the Lombardi Trophy.

In holding off the Browns last weekend he broke into the top five for most playoff wins in NFL coaching history, tied fifth with Chuck Noll on 16 behind Joe Gibbs (17), Don Shula (19), Tom Landry (20) and Bill Belichick (31). Suddenly his third-most 14 playoff defeats demand less attention.

The conviction and urgency of the Chiefs’ fourth-down conversion to beat Cleveland contrasted where Reid had struggled to get over the line in the past.

In February 2005’s Super Bowl XXXIX defeat to the Patriots, the Eagles forced a three-and-out to get the ball back while trailing 21-14 with just under six minutes to play, before taking 12 plays to gain 49 yards as the drive ended in a too-little-too-late 30-yard touchdown pass from McNabb to Greg Lewis. McNabb’s three interceptions on the day were defining, and the conclusion to the game anything but the Reid the NFL knows today.

Questions had also been asked of him earlier in the day when Reid called his first timeout of the first half with just 10 seconds left after the Eagles had looked in promising shape to take the lead ahead of the break.

The January 2016 Divisional Round defeat to the Patriots saw the Chiefs, down 27-13, regain possession with 6.29 left, launching a 16-play drive to get down to the one-yard line where it eventually took them six plays and 80 seconds to score, by which time there was only a minute remaining. 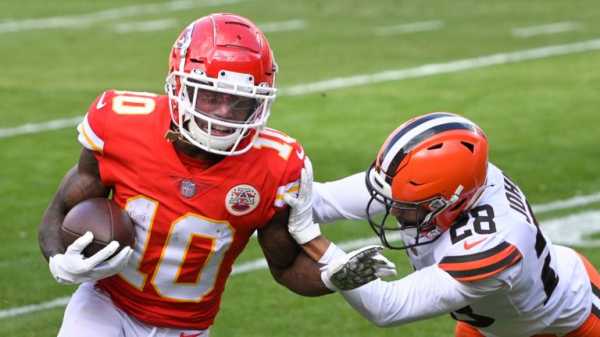 5:49 Highlights of the Cleveland Browns against the Kansas City Chiefs in the AFC Divisional Round

Reid’s 1-5 record in Conference Championship games and infamous blown leads in the postseason had cast a shadow over him prior to last season.

On Wild Card weekend in January 2014, the Chiefs were beaten 45-44 by the Indianapolis Colts having led 38-10 in the third quarter, before suffering a 22-21 defeat to the Tennessee Titans in January 2018’s Wild Card match-up after entering half-time up 21-3.

He and his players could have panicked when Mahomes exited the Browns game with a concussion, but they didn’t. And if evidence of the mental strength he has instilled in this team is required, look to the last season’s comeback from 24 points down to beat the Houston Texans or the 21 unanswered points they reeled off to beat the 49ers from 20-10 down in Miami.

Reid’s players, past and present, have refused to direct the blame towards him when things go wrong. Whether it be a timeout decision or clock management, the common response has pointed towards a meticulous and calculated operator, for whom every decision has a detailed reason behind it.

He’s too smart, too personable and too devoted to have ever really warranted criticism for a mistake. His long road to silverware is perhaps more a case of the NFL being the ruthless beast that it is. 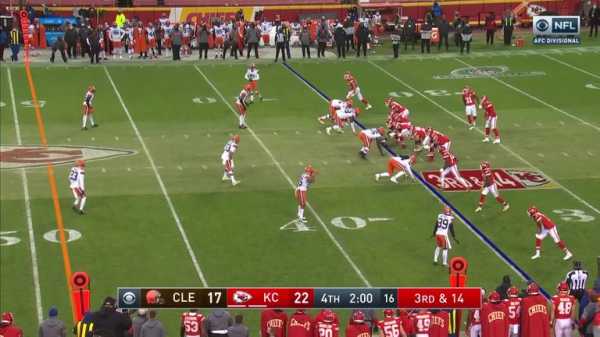 “He’s one of the greatest coaches of all time,” said Mahomes after the Super Bowl in Miami. “I don’t think he needed the Lombardi Trophy to prove that. But just to do that, it puts all doubt aside, and he’s going to be listed as one of the all-time great coaches in history whenever he wants to be done, which I hope is not anytime soon.

“The work that he puts in day in and day out. He’s there at like 3 in the morning, and he leaves at 11. I don’t think he sleeps. I’ve tried to beat him in, and I never can. He’s someone that works harder than anyone I’ve ever known, and he deserves it. I’m glad we were able to go out there and get that trophy for him.”

The turnaround in Kansas City has been remarkable.

The Chiefs were coming off the back of a 2-14 season when Reid took over as head coach in 2013, before 11-5 records either side of their 9-7 return in 2014 earned them three straight second-place finishes in the AFC West behind a rejuvenated Alex Smith, who had shaken off the injury troubles he faced with the 49ers.

Reid has since claimed five straight division titles across Smith’s best football over his final two years as starter and the subsequent emergence of Mahomes, turning an offense that ranked in the 20s from 2013-2016 into one that ranked fifth in 2017, first in 2018, sixth in 2019 and first this season.

Memories of Ricky Manning’s three interceptions for the Panthers in 2003, McNabb’s turnover-heavy day against the Tampa Bay Buccaneers in 2002 and the stumbles on the way to a maiden Superb Bowl are in the past.

Reid never grumbled or let himself get down about the setbacks as he strived to maintain the enjoyment of coaching the sport he loved.

“It’s not about me getting over the hump,” Reid once said. “It’s about our team playing well. That’s what I’m into.”

With that in mind, it’s all the more frightening to think that victory in Miami might just have been the start for Reid’s Chiefs.