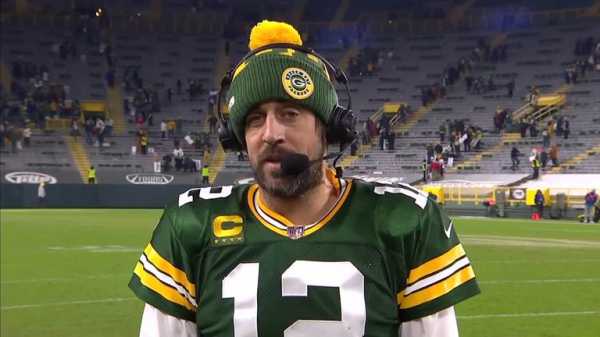 2:03 Quarterback Aaron Rodgers was proud of his Green Bay side as they secured their spot in the NFC Championship Game

He wasn’t thrilled the Packers had momentarily considered life without him, overlooking the most talented wide receiver class in recent memory in the process. Of course he wasn’t, no storied quarterback would.

Rodgers isn’t angry, though, but instead relaxed. Menacingly relaxed. The narrative suggestive of Love’s arrival serving as added motivation may have some truth to it, but it’s more likely the year of experience in Matt LaFleur’s offense that has enriched one of the league MVP frontrunners. Right now, he cuts the figure of a man with it all worked out.

For some, the fan-less atmosphere presented a challenge in itself, but for Rodgers, it only amplified the magnificence of his offside-luring hard count.

Rodgers led the league with a 121.5 passer rating having finished the regular season 372 of 526 with a 70.7 completion percentage (1st), 4,299 yards (7th), 48 touchdowns (1st) and incredibly just five interceptions. He slung gold dust from behind a vastly-improved offensive line that limited opponents to just 20 sacks, 26 hits and 80 pressures before stifling the Rams’ No 1 ranked defense last weekend without injured Pro Bowl tackle Bakhtiari. 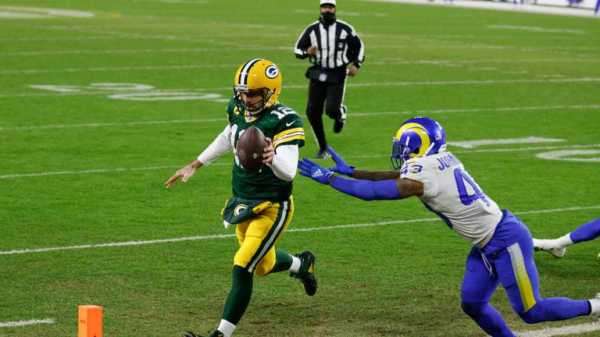 1:13 An incredible solo touchdown from quarterback Aaron Rodgers saw Green Bay score against the Los Angeles Rams, but the Packers failed to move further clear thanks to the botched snap!

Davante Adams’ 115 catches for 1,374 yards and a league-high 18 touchdowns along with the dual-threat of Aaron Jones became familiar strings to his surgical bow, while Rodgers has also made impactful playmakers out of tight end Robert Tonyan, wide receiver Allen Lazard and Marquez Valdes-Scantling.

Off the field, he has been attentive to the development of Love while maintaining a focus on his own pursuit of a second Super Bowl ring. And every Tuesday he spends time talking ball on The Pat McAfee Show in a once-not-so-Rodgers-like depiction of how laid back he has truly been, furthering that message by wearing a T-shirt with his own name and face on it in the second week. 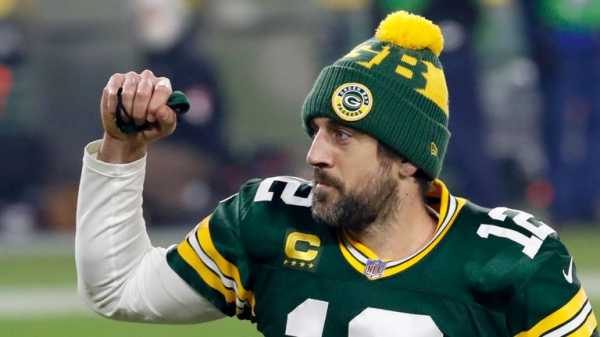 2:47 Relive some of quarterback Aaron Rodgers’ best plays for Green Bay as the Packers beat the Los Angeles Rams to reach the NFC Championship Game

The one meaningful tarnish on his 2020 record was, rather conveniently, his anomalous two-interception display in the Week Six defeat to Tampa Bay.

“I think the Week Six game matters as much as when the Saints went to their place and beat them 38-3,” Rodgers, quite fairly, said this week.

That aside, it’s been all smiles and feet-up, which equates to a pretty scary Rodgers.

The ludicrousness of Brady’s longevity was maybe best highlighted by Sunday’s post-game catch-up with Drew Brees, the age-defying 43-year-old Bucs quarterback moving onto his 14th (14th?!) Conference Championship game while the 42-year-old New Orleans Saints legend was bidding farewell to the NFL.

Kit bag slung over his shoulder like a kid in the park, Brady even had time to toss a dime to one of Brees’ sons in notably good endzone coverage from his brother.

There comes that feeling again. That inescapable feeling that Thomas Edward Patrick Brady Jr might just go and do it all over again. 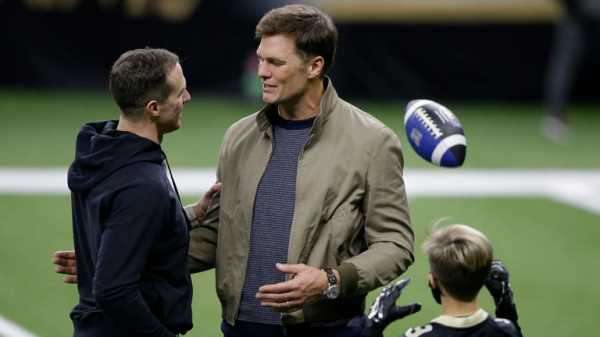 0:26 Quarterbacks Tom Brady and Drew Brees took time to catch up after their divisional playoff battle, and Brady even threw a touchdown pass for Brees’ son

He’s been animated, fired up and shouting at teammates this season, and for all we saw from him in New England, an emotionally-charged Brady has been a positive sign as far as Tampa are concerned (even if the hand-shake snubs are annoyingly immature). The irony of course being that similar behaviour from Rodgers has seen him deemed as a bad teammate in the past. They’re winners, that’s the bottom line.

A new start under the Florida sun was as much a work in progress as many expected, Bucs head coach Bruce Arians and offensive coordinator Byron Leftwich taking time to adjust and adapt to Brady’s approach, and vice versa.

The move always came with a high ceiling though, as Brady was greeted by the most gifted pool of skill position options he had been armed with in some time. 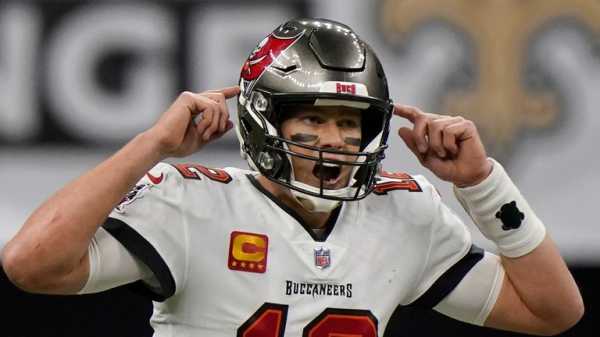 0:55 Tampa Bay Buccaneers quarterback Tom Brady is looking forward to facing off against the Green Bay Packers in the NFC Championship game.

Moving the ball became an early struggle, Arians’ limited use of tight ends was a deviation to what had helped Brady be so successful with the Patriots, tight end OJ Howard’s year came to an end four games, wide receiver Chris Godwin was limited over the opening six weeks due to injury and his Pro Bowl partner Mike Evans, banged up at times himself, took a little longer than anticipated to strike up a relationship with his quarterback.

A fourth-quarter blunder against the Chicago Bears aside, October proved something of a turning point for him and the Bucs offense, which he had made his own by this point. Brady became the oldest quarterback to throw five touchdowns in a single game to fend off Justin Herbert and the Los Angeles Chargers, threw for 368 yards and four touchdowns as well as sneaking in another to down the Las Vegas Raiders, and iced a ferocious defensive performance against the Packers to clinch the NFC Offensive Player of the Month award.

He began to quash doubts over his veteran arm strength and ability to execute Arians’ deep-ball offense and by the end of the season had helped the Bucs offense rank third overall in scoring. 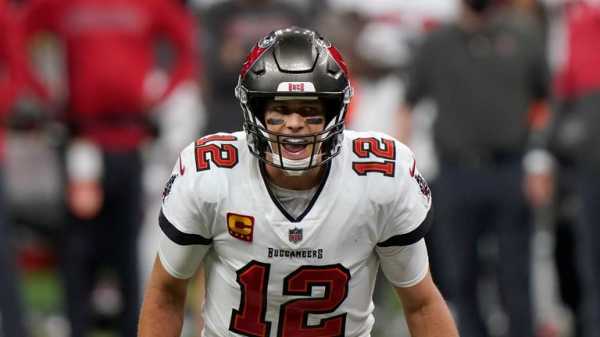 2:04 Watch some of Tampa Bay Buccaneers quarterback Tom Brady’s best plays from his 3-touchdown win over the New Orleans Saints in the Divisional Round of the playoffs

In Brady-like fashion, he made a reliable commodity out of the less talked about Scotty Miller, before the expected embarrassment of riches became more evident when Rob Gronkowski shrugged off a slow start to become a major factor in the passing game and Antonio Brown was introduced across from Evans and Godwin.

Perhaps more importantly, the pass protection that always promised to be defining upon Brady’s arrival delivered on its end of the deal, and with necessary consistency, with left tackle Tristan Wirfs a surprise Pro Bowl snub after a particularly tremendous rookie year.

It’s poised so perfectly, both quarterbacks playing their best football behind stern offensive lines, with dynamic running games, highlight-reel receivers and, thanks to progression on the Packers’ part, two defenses capable of troubling both passers.

Let’s enjoy this one. With Brady 43 and Rodgers 37, round four may potentially be the last.