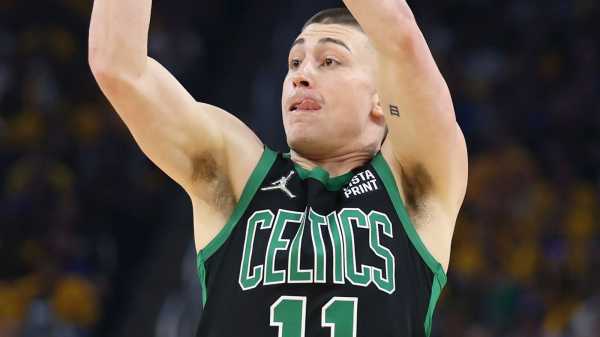 The noise of the TD Garden has been cacophonous throughout the NBA Playoffs but the decibels reached a new level during Games 3 and 4.

Boston, a sporting city of great tradition and pedigree, has a team in the NBA Finals for the first time since 2010 and is seeking a first NBA title since 2008 – which would be an NBA-record 18th for the franchise.

It’s safe to say that fans packing the arena have bought into what Ime Udoka’s young side is trying to accomplish. But the Celtics will need their vociferous backing more than ever as the team aims to prevent the Golden State Warriors sealing a fourth championship in eight years on Thursday night, live on Sky Sports Arena & Main Event, from 1.45am overnight.

Celtics backup guard Payton Pritchard, speaking exclusively to Sky Sports, is glad to have the fervent support of the Garden’s fans to help lift the team as Boston aims to respond from consecutive defeats for the first time in the 2022 NBA Playoffs.

“I think it’s the craziest arena in the NBA,” Pritchard said. “It’s wild, even pre-game when you go off for warm-ups. I mean, it’s already packed and it’s rocking like this. It’s not like that anywhere else. So to have that on our side is unbelievable.”

As a result of the reversals in Games 4 and 5, Boston is now 3-2 down in the best-of-seven series, and will need to win twice in a row to raise banner No 18 into the rafters, but Pritchard says the team are not thinking about the pressure of being in a must-win situation.

“Basketball is fun so we’re trying to go into it with a good mindset,” said the second-year guard. “Enjoy the moment, be ready for the challenge ahead, with a clear mind, though.

“Any game is different, you know, it’s a new challenge ahead. You can’t really look at 3-2, 2-2… Just every game, you got to try to win that one. So, we’re just set on winning Game 6 and once we take care of that, we’ll move on to the next one.

Boston are 4.4 points better off in the minutes Pritchard has been on the floor in these finals, an average of just under 12 per game, but he has only hit 25 per cent of shots from beyond the arc – negating what is probably his strongest offensive attribute – but the former Oregon Duck doesn’t want to be pigeon-holed.

“I’m playing on a team that’s in the finals,” Pritchard said. “A lot of people want to try to put people in boxes and stuff, but you’ve got to sacrifice and do what’s needed for the team.

“They want me come off the bench and give an energy boost, scoring boost, and I’d like [to be] making some plays defensively. Everybody on this team is trying to be a winner so you’ve got to do the little things, and me: Spacing the floor, making the hustle plays, being that type of player. And hopefully that will lead to us being successful.”

Prtichard has particularly enjoyed the challenge of coming up against one of the best point guards of all-time in Stephen Curry and one of the all-time great teams in the Warriors. The 24-year-old admits though that he won’t be able to truly reflect on the gravity of playing in his first NBA Finals until the series is finished.

“Everybody’s challenging me, Steph is unbelievable,” Pritchard said. “So you’re dealing with players that are super-talented, and you’ve just got to be willing to take the challenge. You can play great defense, they’re gonna hit some shots, but that’s okay. You’ve got to never back down and be ready to go every possession.

“I think I’ll probably realise it more after the season’s over then I’ll relive the moments. But you know, you’re so caught up in the moment and trying to win and you’re not really focused on all that.

“Even though it does help the energy’s great, you’re just trying to focus on the task at hand.”

If Boston can manage to do that and take victory on their home floor, it would set up a winner-takes-all Game 7 in San Francisco on Sunday night. The prospect is tantalising for Pritchard.

“Get the win tomorrow and then go to Game 7 will focus on that and then that would be unbelievable,” he said. “To play a Game 7, NBA Finals, I think that’s what everybody dreams about as a player. It’d be the biggest stage and basketball so it’d be amazing.”

Watch the NBA Finals exclusively on Sky Sports – see the list of games here and subscribe to watch the live action.