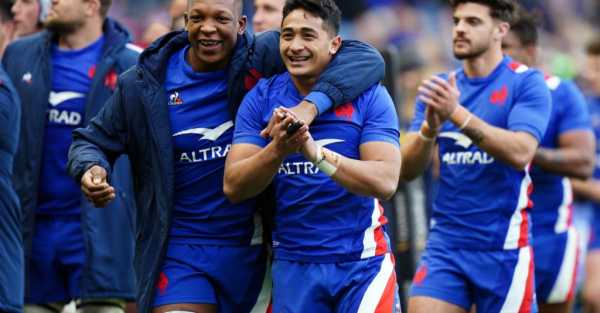 England and France produced victories in Saturday’s round-three matches in the Guinness Six Nations while Ireland swept aside Italy at the Aviva Stadium.

Here’s five things we learned from the games.

The biggest winner from Saturday’s action was France as they crushed Scotland 36-17 with ominous ease. It was an accomplished victory that matched brute strength with artistry as they target a first title for 12 years. Wales in Cardiff is their next assignment before they complete their seemingly unstoppable march towards the Grand Slam when they host England in the climax to the tournament. And while Scotland played a role in making them look unstoppable, it is clear France have frightening talent overseen by their scrum-half magician Antoine Dupont.

England’s search for an identity

England have fought their way back into title contention admirably following their opening-day defeat to Scotland, producing a bonus-point win in Rome and averting disaster in the face of a determined Wales fightback. Yet they head into the final two matches against Ireland and France, who will provide stiffer tests than those encountered so far, in urgent need of an identity. Their pack has been resolute and resilience runs throughout the team, but beyond Marcus Smith they rarely fire a shot in attack. Eddie Jones reasonably enough talks of a young side in transition, but the additional picture emerging from Twickenham on Saturday is of a group missing a collective sense of purpose.

Faletau rolls back the years

As Taulupe Faletau produced a towering display in defiance of having been limited to only 144 minutes of rugby this season because of an ankle injury, Wales fans will wonder what might have been as their team’s title defence ended with two rounds to spare. Faletau was magnificent and his class magnified the cost of a lengthy injury list. Having fought their way back to 17-12, Wales lacked the firepower to continue rattling England with Lions Alun Wyn Jones, Justin Tipuric, Ken Owens, George North and Josh Navidi all lost to the treatment room.

The solitary outlet for entertainment in a dull first half at Twickenham was the sight of Alex Cuthbert scything through English ranks. Time and again white shirts were cast aside as Cuthbert emerged as by far the most effective carrier on either side. Louis Rees-Zammit was dropped for this fixture and if Cuthbert’s international resurgence continues then the poster boy of Welsh rugby may be facing an extended spell on the sidelines. It was a 50th cap for a 31-year-old who made his Test comeback in the autumn after four years of exile.

Spare a thought for Italy. Playing to avoid a 35th successive Six Nations defeat, the stars aligned against them. Hooker Gianmarco Lucchesi had already departed injured so when his replacement Hame Faiva was sent off for a dangerous tackle, they were forced to take off an additional player – they chose number eight Toa Halafihi – as punishment under World Rugby regulations for going to uncontested scrums. The final indignity arrived in the last 10 minutes when Braam Steyn was shown a yellow card, reducing them to 12 men. Italy played a leading role in their own downfall, but luck is proving every bit as elusive as that long-awaited victory.